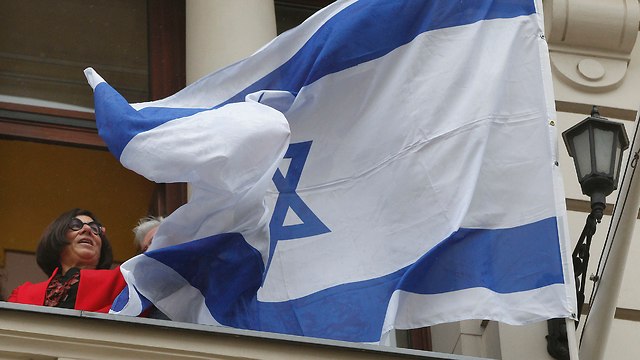 Ambassador Anna Azari hangs the national flag from the Bristol Hotel in Warsaw, which was the place of Israel's first diplomatic mission as a new nation, in a re-enactment of the 1948 ceremony establishing the outpost.

Israel marked the 70th anniversary of its first diplomatic mission as a new nation Tuesday with a re-enactment in the city that hosted the outpost—Warsaw, Poland.

Israeli Ambassador Anna Azari, flanked by other diplomats, hung the Israeli flag from a balcony of the historic Bristol Hotel in central Warsaw.

Just as in 1948, a small crowd on the street below applauded and sang the Israeli national anthem.

Israel chose the Bristol as the seat for its mission because the hotel was one of the few buildings that had not been destroyed by Germany during World War II. The Israeli Embassy in Poland is in a leafy residential neighborhood.

The modern state of Israel was created in 1948, and many of its early leaders and settlers were Jews from Poland—the heartland of European Jewry before the war.

During the ceremony, embassy officials showed a brief video of the 1948 ceremony establishing the mission. One key difference: while all the diplomats then were men, the ambassador and many other Israeli diplomats in Warsaw today are women.

Holocaust survivor Marian Kalwary attended Tuesday’s reenactment of an event he witnessed as an 18-year-old at his mother’s urging.

The Star of David on the Israeli flag he saw raised with pride that day was the same symbol that Warsaw’s Jews were forced to wear a few years earlier while confined to a ghetto a few blocks away and sent to death camps by Nazi German forces.

Kalwary said his mother was very moved by the ceremony recognizing Israel’s place on the world stage, describing it as a moment he could never forget.

The anniversary re-enactment follows efforts by Poland and Israel to repair their typically strong ties after a Polish law that sought to regulate what could be said publicly about the Holocaust caused tension early this year. A presidential adviser read out a letter of greeting from President Andrzej Duda on Tuesday.