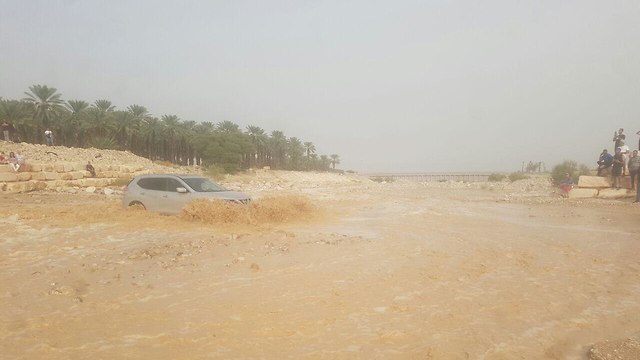 4-year-old drowns in flash flood in the Negev

Winter storm strikes the country, causing flash floods, hail and strong winds; storm is expected to strengthen during evening and night time, with winds reaching speeds of up to 100 kph.

A 4-year-old boy drowned Thursday in a flash flood at a stream between Arad and the Bedouin town of Kuseife amid the winter storm that has struck Israel since the afternoon.

The boy's family said they had noticed he was missing after he did not come home, which prompted them to begin searching for him.

Flash flood in the Negev area

After the boy was found unconscious in the stream, MDA paramedics gave him initial treatment at the scene, and evacuated him to the Soroka University Medical Center in Be’er Sheva while performing resuscitation on him. The boy was pronounced dead at the hospital after arriving without a pulse.

Meanwhile, nine people hiking in the Tze'elim stream were extracted by volunteers from the Ein Gedi rescue unit, after their three vehicles got stranded there.

The rainstorm was expected to begin on Thursday morning, but it was delayed on its way to Israel and hit the country's shores only in the afternoon.

So far, the Western Galilee has seen heavy rains and hail; a few flash floods were noted in the Negev area; and it rained briefly in Jerusalem.

However, the major storm—which is expected to include heavy rains, thunderstorms, winds that could reach up to 100 kph, and floods along the coastal plain—is likely to begin during the evening and night time Thursday.

The Kinneret Authority has decided to close the Hallukim, Kursi, and Lavnun beaches of the Sea of Galilee due to the strong winds, which are expected to reach speeds of up to 85 kph in the Kinneret area.

Balls of hail in Rosh HaNikra

Several weather-related damages were already reported in the north. Guy Gibli from Nahariya told Ynet that big chunks of hail made holes in the roof of the shed where he was working. "The huge chunks easily broke the plastic roof," Gibli said.

Big balls of hail also hit the coastal area of the Western Galilee, causing damages to the avocado plantation there.

Hail also fell in Mount Hermon, with temperatures dropping there to 9 degrees Celsius.

Damages to a shed in Nahariya

According to Meteotech Meteorological Services, 15 mm of rain fell in Rosh HaNikra, 10 mm in Misagv, 8 mm in the Hula Valley and 22 mm fell in Moshav Liman over the course of less than half an hour.

Earlier, the police closed Highway 90 to traffic south of the Metsoke Dragot Junction in both directions due to overflowing streams that might jeopardize the drivers.

The Israel Electric Corp (IEC) announced that due to the drastic change in weather conditions, there might be disruptions in electricity supply, despite of efforts invested to prepare for the storm in advance.