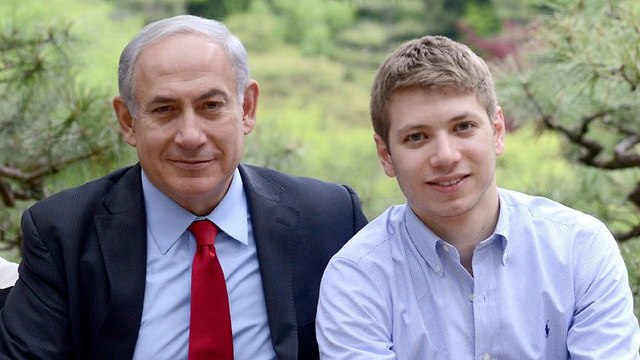 After Yair Netanyahu calls left-wing politicians and the media 'traitors,' his father the prime minister notes he 'rejects the use of the term "treason" by any side in a political argument'; at court hearing on lawsuit, Yair Netanyahu flips the finger to protesters, curses in his cross-examination.

Prime Minister Benjamin Netanyahu has denounced comments made by his son Yair, who on Monday called left-wing NGOs and politicians as well as the media "traitors" who "always side with the enemy." Describing those "traitors," Yair Netanyahu wrote on Facebook that "their heart is harsh towards terror victims, settlers or victims of the (African) infiltrators, while on the other hand their heart is full of compassion toward any Palestinian rioter wounded on the Gaza border. They are traitors! It's time to say the simple truth, according to any basic, human standard, which is acceptable to every nation in history. They're traitors to all intents and purposes." In his own Facebook post, the prime minister rejected "the use of the term 'treason' by any side in a political argument."

Prime Minister Netanyahu with his son Yair (Photo: Kobi Gideon/GPO)
However, the prime minister added that "left-wing protesters and others" accuse him of "treason." "The media didn't say a word about that," the senior Netanyahu complained. "It appears that in their opinion, it's okay to use the term 'traitor' as long as it's directed at Prime Minister Netanyahu. What the right-wing is not allowed to do, the left-wing should not be allowed to do either. Enough with the double standards." This wasn't Yair Netanyahu's sole controversy of the day. Earlier on Monday, the prime minister's son gave his testimony at court in a lawsuit he filed against Aybee Binyamin, a social activist and a member of the Labor party.

Yair Netanyahu in court (Photo: Yair Sagi)
The prime minister's son is demanding NIS 140,000 in compensation for a Facbook post published by Binyamin, in which the social activist claimed the Mossad had issued Yair Netanyahu a diplomatic passport under an alias at the premier's request as part of a ploy to launder money that was deposited in a bank in Panama. On his way into the Tel Aviv Magistrate's Court, Yair Netanyahu, who was greeted with calls of "trash," responded by giving protesters the finger.

Yair Netanyahu giving protesters the finger outside the courtroom (Photo: Yair Sagi)
During his testimony, the junior Netanyahu complained that "You brought bullies. In other places, this would've ended in jail (for the protesters), if this was right-wing against left-wing. But the left-wing is allowed." "I'm very upset," Netanyahu told the judge. "I was violently attacked at the entrance to a courtroom in the State of Israel. There were swear words I don't want to repeat. Everyone heard Aybee Binyamin's friends say 'I hope you come outside' and 'I'll beat you up.' I'm not leaving until all of the bullies are removed, all of Aybee Binyamin's brown-shirts."

In an attempt to calm Netanyahu, the judge told him "You have security," to which he replied, "I'm not protected. They are going to curse at me and hurt me. They told me they would beat me up. I want them to be removed."

During his testimony, Netanyahu was sarcastic and blunt. Judge Avi Shalev tried to calm him down, asking his attorney Yossi Cohen to assist. Cohen himself experienced difficulties in communicating with Netanyahu, who got carried away in the heat of the discussion.

When Cohen asked his client not to respond to certain questions, Netanyahu replied, "I'm enjoying this."

Netanyahu also accused Binyamin of using him and bad-mouthing him just because he is the prime minister's son. "If my name was Yair Cohen, none of this would have happened," he charged.

He reiterated his apology for writing the aforementioned post, but the premier's son said he would withdraw the lawsuit only if Binyamin declares his post to be false (and not just "probably" false).

Furthermore, Binyamin explained he had not requested the Netanyahu family's response before publishing the post, since he did not have access to them, and that he publishes dozens of posts a day.

"If Netanyahu was offended, I offer him my sincere apology, this is not my way. I condemn (this behavior) and apologize on behalf of my friends," he said.

"I have a deep political dispute with the prime minister. I almost never write about Yair. I wish for a civilized country. The Likud party also deserves an honest prime minister. Netanyahu is super corrupt. I wish him a cell in Maasiyahu Prison," Binyamin lashed out.

As the hearing concluded, the judge suggested that both parties reach a compromise. However, Cohen rejected the suggestion and asked for the court to give its verdict.