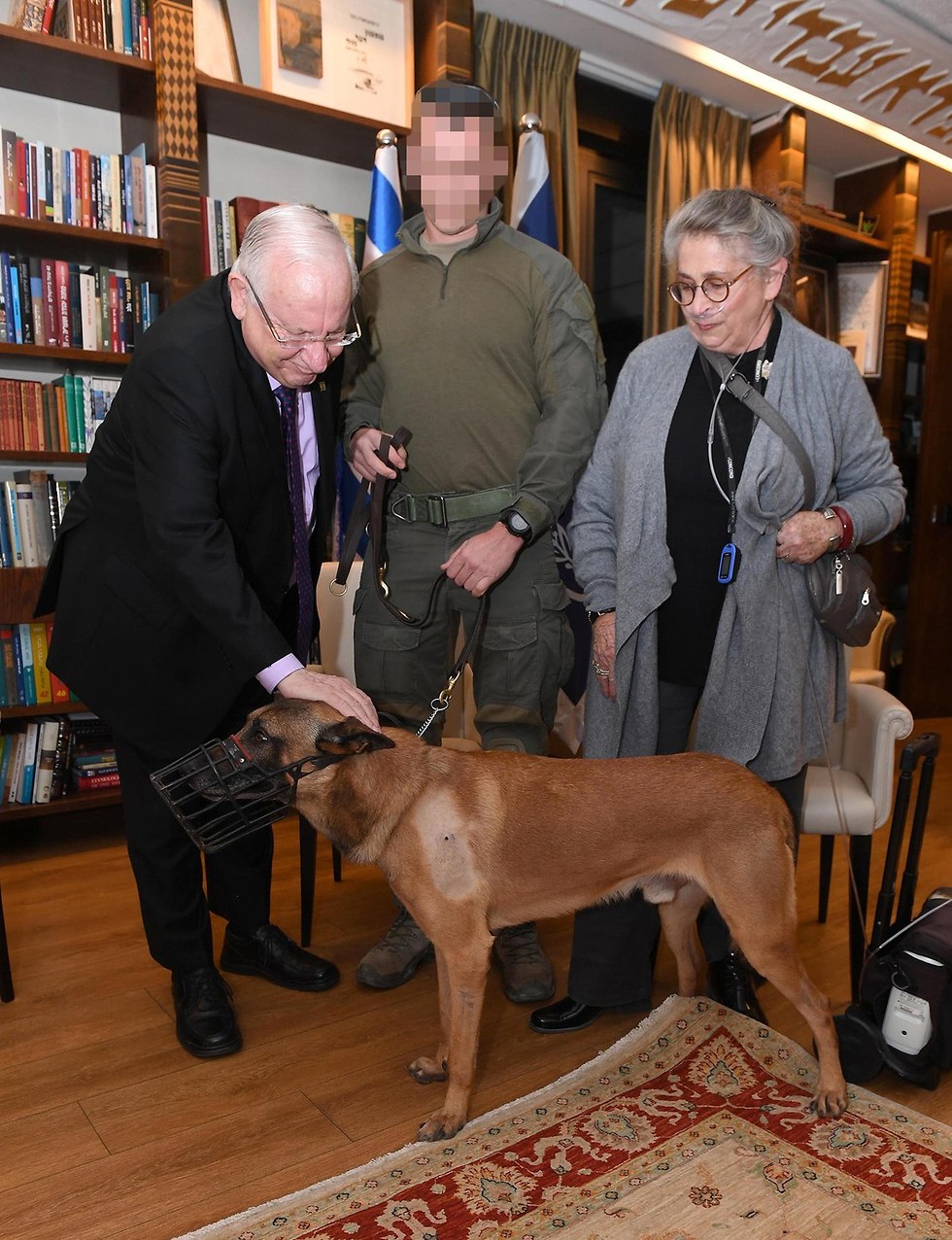 Presidential pats for the canine cop who brought down terrorist

Rivlin hosts the heroic pup behind the successful operation to catch the Palestinian who murdered two Israelis in October; 'If we were alone, I would pamper you,' president tells Rambo

It's not every day that you meet a canine cop with a stirring battle tale and more than three years of successful police service under his belt. But on Tuesday, President Reuven Rivlin and his wife, Nechama, got to meet Rambo, the dog behind the operation to take down Ashraf Na'alwa, the terrorist who committed the shooting attack at the Barkan industrial area.

Rambo, who sustained a gunshot wound to the neck during the operation, was warmly greeted by President Rivlin, who thanked the brave pup and his comrades from the Israel Police Yamam counter-terrorism unit for their important contribution to Israel's security.

"All outstanding soldiers come to the president's residence, and from time to time I'm happy to host outstanding dogs as well. Take care of yourselves; your work is extremely important. The entire nation thanks you," Rivlin said.

After a brief conversation between the president and the fighters, Rivlin asked to feed Rambo but was told not to, since the dog is under a strict training regimen. "Trust me, if we were alone, I would have pampered you" the president told Rambo, who was sitting at Rivlin's feet and enjoying the attention.

Rambo was first in when troops cornered Na'alwa at hideout in the Askar refugee camp in the West Bank, some two weeks ago. The dog sustained a gunshot wound to the neck from what turned out to be the same gun that was used to kill Kim Levengrond Yehezkel, 28, and Ziv Hagbi, 35, in the West Bank shooting attack.

"We reached the house... and I ordered Rambo to search inside," said A., a sergeant major of command and Rambo's handler. "We heard gunshots….and I saw Rambo coming out of the house and walking toward me…he had a gunshot wound to his neck and shrapnel all over his body."

The Belgian shepherd, was immediately evacuated to the Veterinary Teaching Hospital in Beit Dagan, where a veterinary team decided to leave the 9 mm bullet in his neck, fearing any attempt to remove the bullet would cause further damage.

"Thanks to Rambo, the terrorist was found and fighters' lives were saved," A. said.

Rambo, almost five years of age, was just a small puppy when he started his training. He was born in the Yamam unit and became operational after a year and a half. The canine cop is beginning a long rehabilitation process, but his brothers in arms hope he will soon return to full operational activity.

His father also serves in the unit as an assault dog.