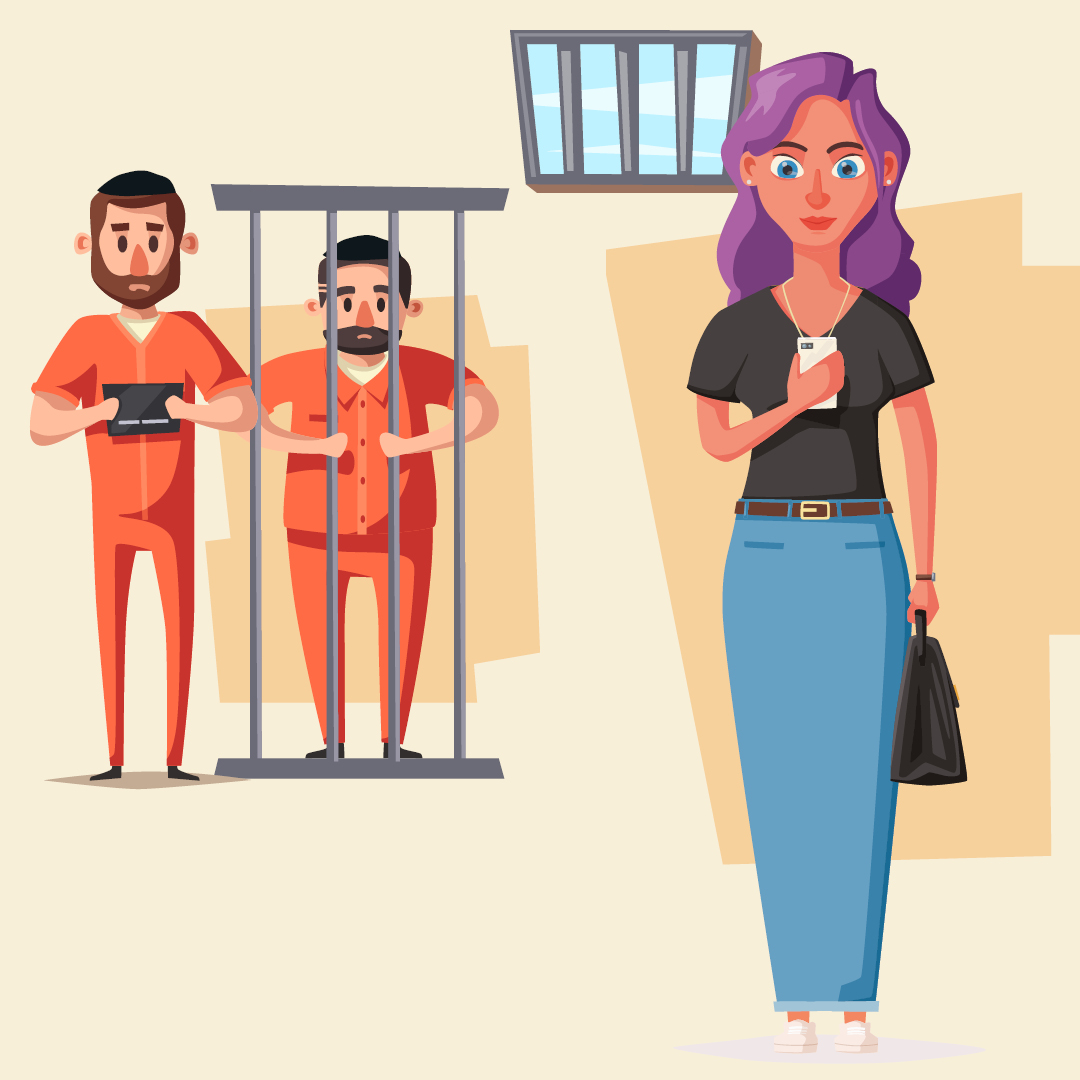 A match made in prison

Esti had already bought a wedding dress and booked a venue when she learned that she had fallen prey to a convicted rapist and con artist who pretended to be a marriage broker and a rabbi.

Like most other young ultra-Orthodox women, when Esti (the names of the women have been changed to protect their privacy) decided to get married she turned to a matchmaker to send her offers. Since she was a little older than the average, and had high demands, Esti had to wait a while until she got a long-anticipated phone call from a famous matchmaker, who was a rabbi in a yeshiva. The groom, the matchmaker said, was a pious man, newly religious. For Esti, it seemed that all of her dreams were coming true. There were only three issues. The so-called matchmaker wasn’t a rabbi but a convicted felon named Menahem Mendel Saadon. The phone calls he had with Esti were from prison. And the groom himself was also a felon who owed millions to the criminal underworld.

Esti wasn’t the first young woman to fall for this scam. Mendi—as Menachem Mendel Saadon called himself—ran a thriving matchmaking business from prison, matching felons with unsuspecting young brides who knew nothing about the men they were paired with.

Esti, 26, is from an ultra-Orthodox Chabad community in the center of Israel. When it came time for her to marry she approached several matchmakers, hoping to find a suitable husband.

A year and a half ago, a good friend told Esti she had been the subject of an enquiry by a matchmaker. “He sounds serious,” said the friend, “he asked me a lot of questions.”

Several days later the matchmaker called Esti, saying he was a rabbi at a yeshiva in central Israel. “I know the issues involved in matchmaking in our community,” he told her. “I only make offers (for a potential match) based on a genuine acquaintance, I don’t settle for just reading about someone.”

Esti was impressed. “It was very persuasive. He was truly interested in hearing about who I was, and he asked a lot of questions.”

After a few informative conversations over the phone, Mendi the matchmaker made her a match — a man named Isaac. “He’s an old friend of mine, who became religious after he had a miraculous spiritual experience with the Rebbe,” Mendi said, referring to late Chabad spiritual leader Rabbi Menachem Mendel Schneerson. He told her all about her suitor's apparently moving life story. He even said the match was “financially and professionally sound.”

After a while, Esti and Isaac started meeting and Esti was very impressed. “I had met a guy who looked ultra-Orthodox, with a beard, a hat and a suit. He looked pious. During our meetings he talked about the Torah and he seemed just perfect. He presented himself as a man of means.”

After every meeting, Mendi would call Esti to ask how the date went. He even asked her to send him a photo of her handwriting, so he could decipher it with graphology, “to make match the even better.”

A little before Passover, Mendi called Esti to say he was going to be away for a while, claiming he was going to Cozumel, Mexico, as a Chabad emissary. Isaac backed him up and even said he was taking Mendi to the airport. “In hindsight, I ask myself how could I have been so naive,” Esti said.

Three weeks later, Mendi called from an unlisted number, asked about how the dates were going, and told her all about the beautiful beaches of Cozumel. What Esti did not know was that the only views the matchmaker was seeing were prison walls, and that the unlisted number belonged to a prison phone.

As things progressed between Esti and Isaac, she started feeling like everything was just a little too perfect. But she brushed off the sense of disquiet and the two decided to get married. A few days before the engagement ceremony, the future groom told Esti that he wanted to tell her something personal. “My shares crashed,” he said. “I’m in debt.”

Esti consulted with her family, and decided to go ahead with the wedding—on the grounds that, “you don’t find a good guy every day.”

Several days later, Mendi’s mother came by to congratulate Esti, and to collect “the matchmaking fee.” She also presented herself as a bridal counselor.

SHortly before the wedding, when Esti had already found a dress and booked a venue, a family member overheard he rtalking about Mendi and became suspicious. “I’m almost sure I’ve heard this name, and that the man was charged with rape,” he told the astounded Esti. The relative then hired a private investigator, who brought indisputable evidence: The matchmaker is in prison. When he said he was a rabbi in a yeshiva, he was actually under house arrest at a yeshiva for the duration of the legal procedings against him.

Mendi Saadon was actually 36-year-old Menahem Mendel Pinto. Saadon was his mother’s maiden name, and the truth about him was extremely shocking and disturbing.

In July 2015, Pinto was charged with a list of sexual offenses he had committed against his partner’s daughter, who was 17 at the time. He repeatedly raped the teen, committed indecent assault and sexual assault in his living room over a period of several days. He also forced her to watch pornographic videos with him and gave the girl a variety of illicit substances.

That wasn’t all. The family member's private investigator also looked into Esti’s future husband, and what he told her broke her heart. Isaac was a felon who had been arrested several times for drug trafficking, and owed millions to the criminal underworld.

“Of course, I called it all off,” said Esti. “I had to pay a fine of NIS 10,000 to the wedding venue, but the money was nothing in comparison to my mental state. I walked around for months feeling like I had PTSD. I didn’t dare go out of the house alone. I was amazed by how close I was to building a life with a dangerous felon. I felt like I experienced a miracle (by discovering the truth before the wedding). My life was almost destroyed, my relative and the private investigator saved my life.”

In hindsight, Esti started connecting all the dots. Mendi had indeed asked deeply probing questions—and reported the answers right back to Isaac, who then used Esti’s exact words when he spoke to her.

"For instance, I told the matchmaker I hated liars, and on our next meeting Isaac told me, ‘I just hate liars,’" Esti said. “He came out with all these sentences and I just felt like I was listening to myself talking. I was naive. I didn’t understand that this Mendi was a criminal genius. They both did a wonderful job fooling me.”

But the sorry talk did not end there. Several weeks ago, Esti heard from one of her friends that she had been offered a good match, with “a guy who studies at the Chabad yeshiva in Ramat Aviv.” The matchmaker? “Rabbi Saadon.”

Esti asked the friend for her match's name, and a short investigation revealed he too was involved in drug trafficking and fraud. This also happened to a third girl who received an offer of a match from Mendi.

So we called Mendi’s mother and asked for a match.

“He has no phone now,” she said about her son, “but perhaps we can help. Send me your details, your résumé. I also do matchmaking, actually we do it together.”

You and your son work together?

Because I gathered that he offers guys who are yeshiva students.

Does it make sense to you that your son is a rapist who is in prison and is offering matchmaking services? And you even offer to help him with that?

“Listen, did you come here to lecture me or find a match?”

You went to the engagement party of a girl who your son matched with a felon, and asked for money for the match. Does it sound right to you that your son presents himself as the supervisor of a Chabad yeshiva while he is actually in prison?

“Listen to me, first of all, I could put on you trial right now for this. You don’t know the details and from what you’ve told me, I’m 90 percent sure you’re trying to trick me, I got you. This will end badly.”

Instead of offering me a match, you threaten me?

“You don’t know the details, I don’t want to deal with you now at all. Ninety percent of what you told me is inaccurate.”

Is your son in prison at the moment?

“It’s none of your business where my son is.”

It is my business if you two are supposed to offer me a match.

“No, I don’t want to offer you a match. It’s a waste of energy on someone who doesn’t know the real picture.”

I spoke to some girls. Your son calls girls from prison and offers felons — suspects in drug, bribery and fraud cases. Innocent Chabad girls fall for it.

“Listen, do you get your information from that girl who’s bad-mouthing him? She missed out on a person who’s a real gem.”

I've heard about other such “gems” he offered girls, and when we checked, we found they are also felons who served time. Gems like your son, the rapist.

“Don’t say things you know nothing about.”

Is your son also a gem?

“He’s better than you. I ask that you not lecture me. My son, the one or two he did fix up with a match praised God for it. These were people who had made it in life, from Ramat Aviv (an expensive neighborhood in Tel Aviv). Not rapists."

The Israel Prison Service said in response that, “the issue is being examined by prison facilities and intelligence bodies. If any woman feels like she has been hurt or threatened by an inmate, we advise her to file an official complaint with the Israel Police.”

Alon Eisenberg, the lawyer who represents Saadon said in response that his “client firmly rejects all the claims in the article.”