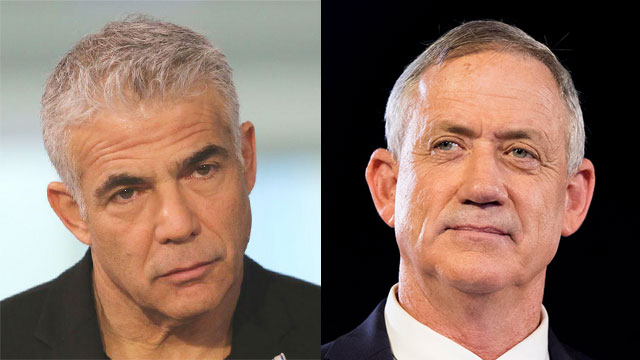 Lapid, Gantz and their battle for the centrist votes

Opinion: Yesh Atid has a worthy roster of candidates for the 21st Knesset, but the party will be fighting for the same votes as Israel Resilience Party, with its broad church of ideals. It remains to be seen whether Lapid's diverse team will pose an obstacle in Gantz's race to become Israel's next prime minister.

Every party presenting its final list of candidates for the 21st Knesset ahead of the April elections is putting on a show. And Yair Lapid's Yesh Atid Party certainly knows how put on a good show.

The list Lapid presented on Monday—which he compiled without primary elections—is as of high quality as the lists presented by parties that hold primary elections. Filling the slate of a centrist party, Yesh Atid comes across as a pretty good option. Its list is diverse, and has a respectable representation of women and candidates of Middle Eastern and North African descent. It also has religious candidates on its top 20 spots. Those candidates secured their spots because they are worthy to sit in the Israeli parliament rather than because of their gender and beliefs.

Nevertheless, the list Lapid presented has the same impairments as those of the Labor Party, and probably are less severe than those of Benny Gantz's Israel Resilience Party, which he presented on Tuesday.

At least two candidates on Yesh Atid's top 10 veer more to the left, toward Meretz, than the center. These two — Knesset members Ofer Shelah and Yael German — are exactly like Labor MKs Stav Shaffir and Merav Michaeli, who secured the fourth and seventh spot on their party's Knesset list. This broad range of candidates, if it does not degenerate into ideological chaos, may gain some of the undecided votes.

Regardless of their political views, one must admit Yesh Atid's candidates are of high quality. Their extensive knowledge on security issues and German's huge experience in a series of significant positions are definitely an asset.

And in any case, when it comes to matters of security and foreign policies, the more influence Yesh Atid has in the future, the more just one person — Yair Lapid — will be calling all the shots. I doubt that Labor Chairman Avi Gabbay, who will probably be the subject of an internal revolt after the elections, would be granted the same privilege.

The massive growth of Yesh Atid, does not stem from its list of candidates for the Knesset, which was kept under wraps. Its growth stemmed only from Lapid's own centrist leanings. He managed to differentiate himself from the left, but now has to compete with Gantz for the same votes. And Gantz did not lean to the right, like Lapid did. Instead, he created a list of candidates with extreme right-wing views alongside candidates whose political opinions are in line with the Meretz Party.

Tzipi Livni (Photo: Yair Sagi)
Against this backdrop it is hard to ignore Hatnuah leader Tzipi Livni's announcement on Monday that she is quitting political life after 20 years and would not run in the April 9 elections.

Over the past few years, I've been keeping an eye on the negotiations with the Palestinians. There's no bigger political lie than the radically leftist image forced upon Livni. During the talks, she was the one that stood her ground more than all the other Israeli representatives. She was extreme only about one thing—her genuine concern to perpetuate the existence of the State of Israel as a Jewish and a democratic state. But she failed in rhetoric. She showed slightly too much understanding and empathy for "human rights" organizations, whose agenda was in reality completely different.

Nevertheless, Livni's credit as a true Zionist exceeds her negative image that led her to pull out of the race for the Knesset. What happened to Livni should be a lesson all those who want to secure the undecided votes across the spectrum from the moderate right to the moderate left. Lapid learned that lesson in time, and this is what keeps him in the picture. It remains to be seen whether Lapid's diverse list will be an obstacle in Gantz's race to become Israel's next prime minister.