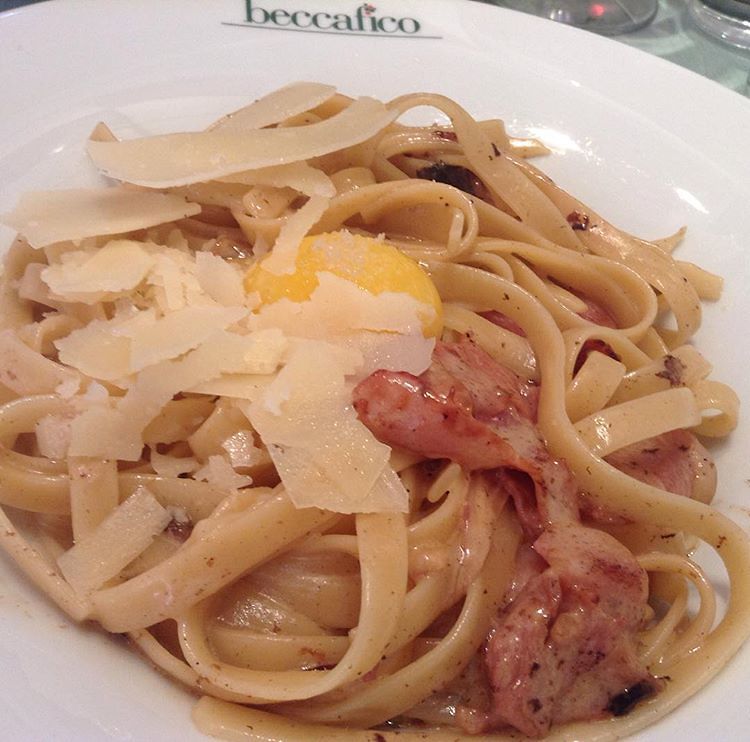 Pasta is a common menu item for many restaurants and cafes, and not just Italian ones. We've compiled a list of eateries serving phenomenal pasta. Buon appetito!

It is hard to think of a more universal comfort food than pasta, which has certainly expanded its appeal—and accessibility—beyond traditional Italian restaurants.

In the list below, almost half the eateries are not ethnic Italian restaurants, but all have dedicated pasta sections on their menus. In most places, the portions are quite generous; and many offer whole grain and/or gluten-free pasta options. The restaurants are not ranked, rather listed in alphabetical order; one is certified kosher. All have English-language menus; price refers to pasta dishes only.

Ambiance: A cozy Italian restaurant with al fresco seating areas on the sidewalk in front and a garden in the rear. Beverages: Limited bar, beer, wine, soft drinks, hot drinks. Pasta: There are two separate pasta sections: Pasta (eight varieties) and Gnocchi (four dishes). In addition, the Starters section lists a risotto that changes daily, and there is a risotto with sirloin among the meat main courses.

Other menu items and desserts: Appetizers, Pizza, and Meat/Fish.

There are five desserts on a separate menu, two of which are Italian classics.

Beverages: There is a separate drinks menu with cocktails, a limited selection of wine and beer, soft drinks and hot drinks.

Pasta: There are six pasta dishes listed, two of which are vegetarian.

Recommended are the casarecce with sausage and greens—tubular pasta with veal and lamb sausage, green onion, green beans, mint, arugula and sweet peas, in a sauce of olive oil and lemon juice—and the pasta with shrimp, in a sauce of carrot juice and cream, seasoned with garlic and rosemary.

Other menu items and desserts: The categories in the afternoon/evening menu are first courses, salads, sandwiches and main courses. Apart from the pastas, there are many gluten-free and vegan options.

A separate menu lists no fewer than 11 desserts, including New York cheesecake and carrot cake with no icing.

Ambiance: A sprawling brasserie and patisserie on the main floor of the upscale Ramat Aviv Mall, Cafe Albert has earned a reputation for serving excellent French food.

Pasta: Five pastas are itemized, as well as one risotto listed as a main course. A pasta dish may also be one of the daily specials.

Recommended are the seafood risotto, made with tarragon butter, tomato sauce and brandy, and the asado beef tortellini, with asparagus and roasted tomatoes.

Cafe Albert (Photo: Buzzy Gordon)
Other menu items and desserts: Menu categories include entrees, salads and main courses, with smaller sections listing extras and side dishes. A separate dessert menu lists no fewer than eight desserts. The apple strudel is worth the 12-minute wait.

Ambiance: Located on a key corner in Raanana’s industrial zone, this branch of the nationwide chain has a spacious indoor area with two seating sections, plus an al fresco area where smoking is permitted.

Pasta: The pasta section lists seven variations of spaghetti (or campanella), differentiated by sauce and/or additional ingredients. In addition, there is goat cheese ravioli with a choice of three sauces and extras.

Recommended are the goat cheese ravioli with sweet potatoes, cream and chestnuts, and the chicken and pesto campanella—corkscrew pasta with white chicken meat, broccoli, mushrooms and cherry tomatoes in a sauce of pesto and Parmesan.

Other menu items and desserts: The restaurant is open from early morning until late night, so there is an extensive menu featuring breakfast (served all day), salads, main courses, pastas and pizza. There is also a children’s menu.

Finally, there is a fairly large selection of desserts, including morning pastries, pies and cakes. The hot chocolate delight is a Landwer speciality, while the new Nutella latte is dessert in liquid form.

Recommend are the chestnut pappardelle with creamy mushroom sauce and a hint of truffle, and the good old-fashioned spaghetti and meatballs, in a tomato sauce that is zesty rather than spicy

Cafe Napoli (Photo: Buzzy Gordon)
Other menu items and desserts: The many menu categories include breakfast, sandwiches, salads, focaccia (with dips), appetizers, pizzas, from the grill, and in the pan. There is an entire page of desserts—many of them decadent—plus a separate list of pastries. In addition, there are sweet shakes and cocktails that could easily be termed “drinkable desserts,” such as the affogato with coconut and chocolate, and the Napoli cream cocktail. Price: NIS 54-78. Cafe Napoli. Not kosher. Sarona Market, Tel Aviv. Tel. (03) 671-4653

Ambiance: A small corner restaurant, with bar and table seating, whose atmosphere leans more towards a bar than a restaurant—although the food by award-winning chef Tom Aviv should never be underestimated. The music is louder here than in the other places on our list.

Pasta: This is the one place that does not have a menu section with the heading "pasta," simply because there are no food menu headings at all. Nevertheless, six of the seven pastas in total are grouped together, for easy reference.

Recommended are the slightly misnamed "It’s All Spinach"—since it is actually pappardelle made from scratch, with lemon butter, pine nuts and spinach sautéed in wine and vegetable broth—and the (Middle Eastern) Druze tortellini (although this portion is smaller than most).

Other menu items and dessert: The whole food menu, called "From Tom’s Kitchen," lists 12 dishes and three pizzas besides the seven pastas.

Desserts were not listed on the menu, but rather explained by the waiter. One novelty you will not find anywhere else is the "Oreo sphinge," a particularly decadent version of the classic cookie, deep-fried in batter.

Ambiance: A neighborhood bistro on a quieter part of Frishman Street, just a block from Rabin Square. There are seating areas in two indoor sections, as well as on the sidewalk.

Pasta: There are no fewer than 12 pasta dishes in the dedicated section, and more than half are either vegan or vegetarian. In addition, there are four risottos listed in the Hot Dishes section; and the daily specials itemized on the blackboard are likely to include gnocchi.

Recommended are the penne with four cheeses, and the risotto with goose breast and lychee.

Lilush (Photo: Buzzy Gordon)
Other menu items and desserts: The menu is one of the most extensive in town, comprising the following other sections: starters (with four subsections), soups, sandwiches, salads and hot dishes. The nine desserts include both familiar options and house specialties. Price: NIS 42-58. Lilush. Not kosher. Frishman Street 73, Tel Aviv. Tel. (03) 529-1852

Ambiance: A family-friendly restaurant in a large suburban shopping mall, with red checkered tablecloths, some bar seating and an open kitchen. There is an al fresco seating area in the summer. One of three restaurants in the chain. Beverages: Cocktails, wine (including hot and cold sangria), imported and domestic beer on tap, soft drinks, hot drinks Pasta: The largest pasta section among the restaurants on this list, with 19 pasta dishes, including two kinds of lasagna and several vegetarian options. There is a separate section listing three risotto dishes.

Recommended are the seafood linguine valentina, featuring a lemony cream sauce, and the penne archo, with chicken, mushrooms, tomatoes, kalamata olives and garlic confit, in a pomodoro sauce with beef stock.

Ambiance: An unassuming house in a residential neighborhood in Pardes Hanna is the unlikely location for this sprawling restaurant and large courtyard. It is also the new home of Ido Feiner, formerly the chef of one of Tel Aviv’s best restaurants, Garrigue. Beverages: Full bar, limited cocktails, beer, wine, soft drinks, hot drinks. Pasta: Nine pasta dishes are listed, each one featuring a differently shaped pasta. Five are vegetarian. In addition, one gnocchi dish and one risotto dish are listed among the Starters.

Recommended are the orechiette with duck ragout, and the lasagna with ground beef.

Ambiance: A no-frills half-restaurant/half-deli that still manages to be a handsome and inviting venue. There are two small tables on the sidewalk outside. Beverages: Juice, soft drinks, bottled beer Pasta: There are a total of 13 pasta dishes, grouped in three categories, from simple to fancy. Since the restaurant is kosher-dairy, there is no meat in any of them; with the exception of one pasta with fish, all the rest are vegetarian. The vegetarian lasagna is listed in the From the Oven category. There are pizza-like “toppings” that can be added as extra ingredients to the pasta. There are also gluten-free and whole grain options.

Recommended are the aglio-olio—spaghetti in a sauce of olive oil, parsley and white wine, with optional chili—and the fusilli Spuntini, corkscrew pasta in a cream and pesto sauce topped with spinach balls.

Spuntini Pasta Bar (Photo: Buzzy Gordon)
Other menu items and desserts: Besides pasta, the other menu sections are starters, ssandwiches, salads, and from the oven. The Italian desserts here are rather unique, especially the torta caprese and sfogliatelle.

Prices: Five pasta dishes at NIS 29, four at NIS 32, and four at NIS 52. Lasagna, NIS 39. Toppings, NIS 6/12. During business lunch hours, these prices include an appetizer and a drink.