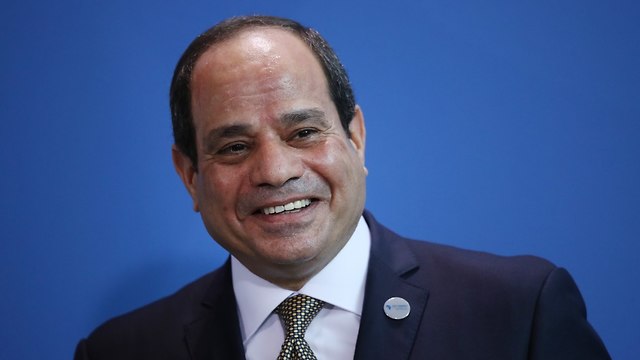 Al- Sisi's opposition protests constitutional changes that could allow him to stay in power until 2034, say they were subject to smear campaigns and intimidation; majority of lawmakers support initial bill, if final version is accepted a national referendum will follow

A coalition of Egyptian opposition parties said constitutional changes that could allow President Abdel Fattah al-Sisi to stay in power until 2034 would pave the way for years of "absolute individual rule" and is urging Egyptians to vote against them. An overwhelming majority in parliament, which is dominated by Sisi supporters, voted for the changes in principle last month, with 485 of 596 lawmakers voting in favor. The chamber is expected to give its final approval in mid-April, with a national referendum to follow.

Egyptian President Abdel Fattah al-Sisi (Photo: Getty Images)
The proposed amendments would reset presidential term limits, bolster the role of the military and increase the president's power over the judiciary. They would extend the two-term presidential limit from eight to 12 years, and would reset the clock for Sisi when his current term finishes in 2022. Sisi's supporters say the changes are necessary to give him more time to complete major development projects and economic reforms. His critics say they concentrate more powers in the hands of a leader accused by rights groups of presiding over a relentless crackdown on freedoms. Parliament last week began holding a series of consultative sessions over the proposed changes. But the Civil Democratic Movement (CDM), a coalition of secular and leftist opposition groups, said they had largely excluded critical voices. As the sessions resumed on Wednesday it called for a "real dialogue" involving a free debate with civil society. "What is going on is not a serious civic dialogue," it said in a statement last week, dismissing what it described as an "approach that consecrates tyranny and paves the way for absolute individual rule for many years to come." Opposition parties said a request for a protest against the amendments outside parliament on Thursday had been refused. Parliament speaker Ali Adel-Aal was quoted by the private Al-Masry Al-Youm newspaper as saying there was no excuse for the protest and that parliament was "listening to all opinions".

Members of parliament who have expressed opposition to the amendments say they have been subject to smear campaigns and intimidation.

Hamdeen Sabahi, leader of the opposition Egyptian Popular Current, said hundreds of opposition figures had been arrested since the amendments were tabled. One civil rights lawyer said at least 120 arrests had been confirmed through the state security prosecution system.

An interior ministry spokesman could not immediately be reached for comment. Parliament spokesman Salah Hasaballah rejected criticism of the hearings, saying all political currents had been invited and that "everyone was granted space to express their views and reservations without interference".

A neighborhood in Cairo, the Egyptian capital (Photo: Shutterstock)
Differences discussed in hearings last week addressed less controversial issues such as the level of the proposed quotas for women in parliament and the choice of name of a second legislative chamber. Five opposition party leaders attended the second set of consultative sessions this week. One, Mohamed Sami of the Karam Party, said they had been able to air their opinions but "there wasn't a real dialogue". Another, Farid Zahraan of the Social Democratic Party, said proper dialogue was impossible against the backdrop of an "unprecedented crackdown" on dissent. The CDM said it was leaning towards urging people to take part in the referendum on the amendments but to reject changes that would "demolish any possibility of establishing a civil, democratic, modern state". Since becoming president in 2014, former army chief Sisi has overseen a far-reaching crackdown that has swept up Islamists and liberal opponents. At least 60,000 people have been jailed, according to Human Rights Watch. Sisi has denied holding political prisoners and his backers say the measures were necessary to stabilize Egypt after its 2011 uprising. On Wednesday the Egyptian actors' union said it had expelled two stars, Amr Waked and Khaled Abul-Naga, who had expressed opposition to the amendments, accusing them of treason for taking part in U.S. Congress hearings on human rights in Egypt. Waked told Reuters he had been receiving threats on Twitter which had intensified after the amendments were introduced. Abul-Naga said on Twitter the decision was hasty and was reached "without any investigation of the facts".