Ilhan Omar during the US midterms in in November
Photo: Reuters 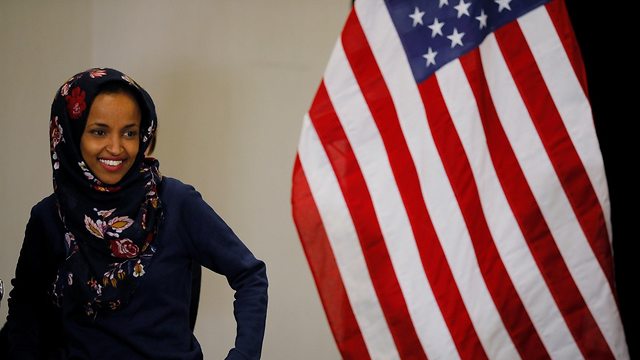 Minnesota Democratic congresswoman targeted by Trump supporter who says he 'loves the president, hates radical Muslims in our government'

A western New York man has been charged with threatening to kill U.S. Rep. Ilhan Omar of Minnesota, among the first of two Muslim women to serve in Congress, said the FBI on Friday. Federal prosecutors announced that Patrick Carlineo Jr. was arrested after placing a threatening call to Omar's office in Washington D.C. last month. Authorities did not say when Carlineo was arrested.

Ilhan Omar during the US midterms in in November (Photo: Reuters)
The FBI said in a criminal complaint Carlineo called her a "terrorist" and threatened to shoot her. The bureau said that Carlineo sounded angry during the call but "spelled his name correctly and provided contact information" to a staffer. Carlineo told the FBI that he is a patriot, "loves the president and that he hates radical Muslims in our government," the criminal complaint says. Carlineo's defense attorney declined to comment on the charges Friday.

Omar was met with backlash for remarks she made earlier this year on Israel, including comments that American supporters of Israel are pushing people to have "allegiance to a foreign country."

Some people perceived Omar's comments were anti-Semitic. She later apologized, saying "anti-Semitism is real and I am grateful for Jewish allies and colleagues who are educating me on the painful history of anti-Semitic tropes."

Omar, a Somali-American, has also received racist comments. In early March, the FBI and other law enforcement agencies were looking into a report of a threatening graffiti message directed at her.

She also was the target of an anti-Muslim poster that appeared at the West Virginia Capitol in Charleston, with her picture over an image of the World Trade Center’s burning towers.