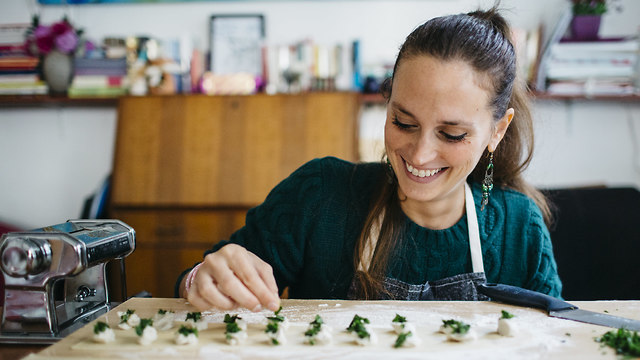 Eatwith Chef Nadia whips up delicious, authentic northern Italian meals, without the usual cheeses in her mission to prove that fine dining is possible without meat and dairy

It may not be the kind of company one immediately associates with Israeli startups, but Eatwith.com is certainly one of the country’s success stories. From humble beginnings in Tel Aviv and San Francisco just seven years ago, Eatwith has become the world’s largest community of food experiences with locals, spanning more than 130 countries.

In Israel alone, Eatwith’s culinary platform for immersive dining now offers some 300 gastronomic experiences, in all of the country’s major cities. In addition to meals served by chefs in their homes, there are food tours of neighborhoods and markets, and even cooking classes. They will even cater your private event.

Eatwith chef Nadia (Photo: Igor Luvinski)
One secret to the site’s popularity is the culinary talent of its highly skilled corps of home-based chefs. The bar is set very high: only five percent of applicants seeking to host under Eatwith auspices are accepted into the ranks of its hosts. One of my early Eatwith experiences was with Nadia (Eatwith is not big on last names: even bios on the website do not reveal them), who was determined to prove that the concepts “gourmet” and “vegan” are not mutually exclusive -- not even in the cuisine of her native land, which is known as being heavily reliant on its outstanding cheeses. I certainly had my doubts, but Nadia won us all over with a meal built around the theme, “Memories of My Italian Childhood.” Fast forward several years, and Nadia has added another menu to her repertoire: “Back to My Italian Roots.” She hosts in a simple apartment in the heart of downtown Tel Aviv, and sets a table with a most unusual tablecloth: one that is indistinguishable from artificial grass.

The preprandial cocktail is equally distinctive: frozen Bellini popsicles, made with Lambrusco sparkling wine and studded with pomegranate seeds. A very refreshing choice.

On the table were decanters of israeli bottled water, and bottles of Psagot Sinai red wine, a pleasant blend of Cabernet Sauvignon and Shiraz. The food service was plated, so there were no traditional place settings: the cutlery was in metal canisters in the center of table.

Photo: Igor Luvinski
The meal started with a north Italy-style pizza: a fluffy focaccia topped with homemade cashew cheese and fresh tomato. According to Nadia, north Italy has a different take on pizza than the more famous versions from the south (Rome and Naples); think of it as the original New York thin crust vs. Chicago deep dish rivalry. In any event, Nadia’s “Spontini” pizza dough was like cake, while it was hard to believe that the vegan cheese was not dairy.

Next came soup, which was served in small jars with screw tops. It was a satisfying, velvety broth of cauliflower with Jerusalem artichoke, perked up by lemon zest and studded with warm, soft croutons.

The pasta course was polenta, in the form of a grilled triangle on a bed of leek and chestnut cream. The superb cornmeal fritter was laced with grated cheese and topped with a pat of melting truffle butter -- and once again, the vegan versions were indistinguishable from the real thing. This was followed by crespelle filled with almond ricotta and spinach, and topped with grated Sicilian tomatoes. The savory crepe, enhanced by a vegan bechamel sauce, was a worthy main course. Sicily was reprised in the salad course, which consisted of razor-thin slices of fennel and red onion dressed in an orange-and-mustard vinaigrette and served on a bed of creamy, lemony cashew cheese. This combination was novel and refreshing.

Photo: Igor Luvinski
Dessert was a rich, espresso-flavored coffee cream enriched with vegan meringue and accompanied by freshly baked cookies. Naturally, coffee in its traditional liquid form was also served. By this time, there was a steady flow of conversations among new friends, as another Eatwith evening of bringing strangers together over good food drew to a close. A first-time Eatwith participant was a culinary guide for the Ministry of Tourism, who pronounced herself impressed with the dinner and said she would recommend the experience to her clients. With veganism on the rise in Israel, Nadia and Eatwith are successfully meeting the rising demand in this challenging gastronomic niche.