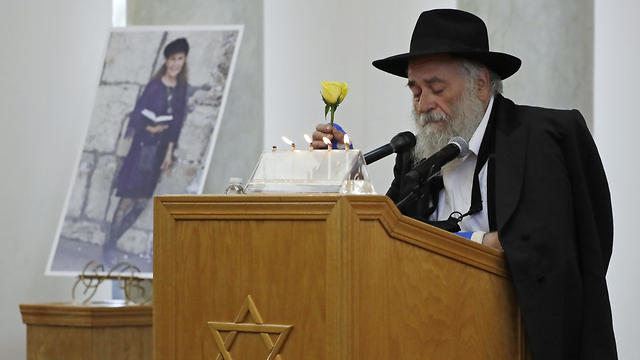 US religious centers buy more insurance after raft of shootings

Congregations are reassessing coverage and buying separate 'active assailant' policies as attacks rise; houses of worship face unique risks as they are inherently welcoming and the physical set-up of many worship centers is also a concern

U.S. religious centers are buying special insurance to protect them from the financial consequences of an armed intruder opening fire in their buildings.

Many congregations have been reassessing coverage and buying separate "active assailant" policies as shootings at houses of worship, including churches, synagogues and mosques, become more common, religious leaders and insurance representatives said in interviews.

Rabbi Yisrael Goldstein at the funeral for congregant Lori Kaye (Photo: AP)
"You didn't think about it until the last couple of years and now it's something that you think about all the time," said Brian McAuliffe, director of risk management for Willow Creek Community Church, whose six Illinois locations serve some 20,000 congregants. Potential violence has become top-of-mind for many religious organizations, following a spate of shootings in recent years. Last Saturday, a woman was fatally shot and three people injured at Chabad of Poway synagogue in suburban San Diego by a gunman identified as John Earnest, 19. He pleaded not guilty to the shootings on Tuesday.

Earnest in court (Photo: AP)
The Poway attack, on the last day of Passover, came six months to the day after 11 worshippers were shot to death at a Pittsburgh synagogue in the deadliest attack ever on American Jewry.

(Photo: AP)
Other shootings in recent years killed 26 people at the First Baptist Church in Sutherland Springs, Texas, in 2017; nine worshippers at the Emanuel African Methodist Episcopal Church in Charleston, South Carolina, in 2015; and six people at the Sikh Temple of Wisconsin in 2012.

Devin Patrick Kelley shot 26 people at a Texas church
Violence also has come in other forms this year, such as the burning of three predominantly black churches in southern Louisiana between March 26 and April 4. Willow Creek bought an active assailant policy two years ago, McAuliffe said. The added insurance covers expenses that are typically excluded from general liability coverage, including medical expenses, victim lawsuits, building repairs or replacement and media consultants.

Following a shooting at a NC church

Houses of worship face unique risks because of their mission to be welcoming, insurers and brokers said. The physical set-up of many worship centers also is a concern.

"You come in the back and everyone is facing the other way," said Peter Persuitti, who heads the religious practice for insurance broker Arthur J. Gallagher & Co. "They are so vulnerable." Willow Creek's coverage costs a "couple of thousand dollars" a year, which is a small fraction of its overall insurance budget, McAuliffe said. Premiums for one policy backed by insurer AXA XL costs $1,200 per $1 million of coverage, said Paul Marshall, who heads the active shooter insurance program for the Ohio-based McGowan Companies, which underwrites the coverage. Recent attacks spurred five synagogues and churches to buy the coverage this week, Marshall said.

Memorial for victims of Pittsburgh synagogue shooting (Photo: AP)
The Archdiocese of Indianapolis bought active assailant coverage last year, covering 141 parishes and 75 schools, said Mike Witka, director of risk management. Insurance companies also are ramping up educational programs for faith-based policyholders to help them manage the risk of violent intruders. For example, nearly 200 parishioners and staff from congregations insured through Church Mutual Insurance Co packed a church in Lenexa, Kansas, last month for a half-day seminar. They learned how to develop security plans and minimize bloodshed if someone opens fire.

Mourning victims in Sutherland
The event is one of nine that Church Mutual planned for the year. Church Mutual's general liability policy includes "catastrophic violence" coverage of up to $50,000 per victim and $300,000 per violent incident. Other measures could change how Americans have long envisioned their religious surroundings. "We don't really like to shut our doors because we want to be welcoming," Witka said. "But we have to start thinking that once mass starts, the doors have to be locked and shut."