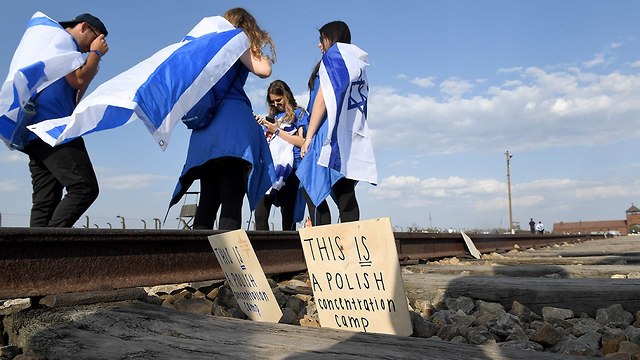 A global disaster, not only a Jewish one

Israel appropriated the Holocaust, it's leaders often manipulate its memory to fan the flame of nationalism, and the survivors themselves often live in extreme poverty; this is an especially dangerous process in a time of Holocaust denial and anti-Semitism

Holocaust Memorial Day is an opportunity to examine what is done — and what isn't being done — about the memory of the Holocaust and for its survivors. Both Israel and anti-Semitic Holocaust deniers have some things to ponder in that regard. It's been 74 years since the death camps were liberated by the allied forces, and we still have among us few survivors who experienced hell on earth, in both mind and body.

Teens during the traditional journey to Poland, standing by the Auschwitz rail track and sign calling the place "a Polish concentration camp" (Photo: AFP)
The Holocaust has been researched and has inspired works of art, literature, cinema, theater, comics and more. In Israel, for instance, three graphic novels about the Holocaust or related issues have been published in the past six years, including one about the Anne Frank story. The Holocaust is studied in many countries as part of the schooling system, but some countries deliberately avoid it. Adolph Hitler's Mein Kampf is constantly being republished in editions that add notes, explanations and context. The Protocols of the Elders of Zion, a fake document published at the turn of the 20th Century and supposedly describes the Jewish plan to take over the world, are still sold worldwide, and still strike the imagination of those who believe in a global Jewish conspiracy. But Israel, and its leader Prime Minister Benjamin Netanyahu, often use the Holocaust for causes that I find unacceptable. For example, it is used to fan the flame of nationalism among high school students and IDF soldiers who go on the traditional trip to Poland, to witness the death camps. In my view, this disrespects Holocaust victims and survivors and the legacy of the Holocaust. Many young women and men participate in the March of the Living, wrapped in our nation's flag, to the sound of the preposterous mantra: "We will not be led like sheep to slaughter". That custom draws a direct line between the state of the Jewish people during the Holocaust and our situation today, here in Israel, in light of the Israeli-Palestinian conflict and the threat from Iran. That's a comparison that's simply out of place.

Historians and academics have been toiling for decades, writing the history of the Holocaust. Their research is based on documents, facts, testimonies, photographs and archives. Irresponsible politicians, however, manipulate this for internal and external interests.

In recent years I had the chance to speak about my graphic novel of the ramifications of the Holocaust, "Second Generation." I'm often saddened to hear Israelis of Mizrahi roots say they are touched by my story but they don't feel they have any familial or historical links to the Holocaust.

I always remind them that their families were on Hitler's agenda for the Final Solution, and their extermination was only prevented by the victory of the allied forces.

This ignorance is a result of the Israeli education system, among others

Moreover, Israel has to be ashamed of how it treats Holocaust survivors and for its faulty management of their compensation funds.

Many survivors live in complete poverty in their final years. Every few years a new campaign for funds is launched to no avail.

I told my father, who lives in Belgium and celebrated his 93rd birthday this month, that it's better that he never immigrated to Israel. He would have lives in extreme poverty here.

The State of Israel appropriated the Holocaust, and that's a horrible mistake.

The Holocaust is a disaster that belongs to all of humanity across the globe. If we presume to be a light unto the nations, we must stop using the Holocaust as a means for self-promotion.