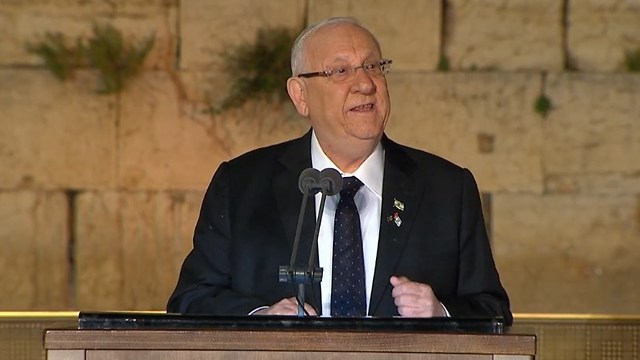 Following a minute-long siren at 8pm, the central Memorial Day event began at Jerusalem's Western Wall; Rivlin: 'we will not be still until every last soldier returns from the battlefield'; 56 soldiers, 13 terror victims added over past year; protest outside joint Israeli-Palestinian Memorial Day ceremony in Tel Aviv

The central gathering ushering in national Memorial Day for Fallen Soldiers and Victims of Terror began at the Western Wall in Jerusalem Tuesday evening at 8:01 pm, following a minute-long siren and moment of silence. President Reuven Rivlin, IDF Chief of Staff Aviv Kochavi and police Commissioner Motti Cohen were in attendance.

President Rivlin spoke about the return of the body of Zechariah Baumel, missing in battle for 37 years, last month, as an example of Israel fulfilling its pledge to Israeli mothers and fathers, who send their children into battle, that Israel will not rest until each and every soldier returns home.

President Rivlin
"This is an obligation that we continue to uphold to the families of those missing in action and those whose burial place is unknow," Rivlin said. The IDF chief of staff spoke about how each fallen soldier strengthens the security of the nation, adding: "The highest expression of the sanctity of life is doing all we can to minimize the extent of losses in battle and in peacetime. The operational objective is primary, and fort hat we endanger our lives. But refining combat methods as well as improving our training is the will of the fallen and we must work to fulfill it."

Kochavi added that the IDF is strong, "well trained, well equipped, has the best manpower and is motivated by the belief in the righteousness of its path and its commitment to the defense of the nation." He also mentioned the families of the missing soldiers and repeated the pledge to bring them home.

Singing nostalgically at the Knesset

At the Knesset, bereaved families were joined by the prime minister, , the president, Speaker of the Knesset Yuli Adelstein, politicians and senior defense and security personnel for the annual Singing in their Memory event.

The crowd sang songs of nostalgia and the Land of Israel with the Shalva band, Shiri Maimon, Yonatan Razel, Natan Goshen, Harel Ska'at and other performers. The event is scheduled to conclude with a song sung by Ska'at and IDF orphans. Netanyahu sang the song Eretz Zvi, by Yehoram Gaon, from the main dais. The song was used as the theme song for the Entebbe Rescue movie which featured Gaon as commander of the operation Yoni Netanyahu, the prime minister's brother.

Also in Jerusalem, the Sultan's Pool arena hosted an event dedicated to remembering, singing and telling the stories of the loved ones lost in battle and to terrorism. Mayor Moshe Lion spoke there of sacrifice and of unity as a source of strength.

On Wednesday at 8:45 am, there will be a ceremony at the Jewish Agency building in Jerusalem commemorating the victims of anti-Semitism around the world, including those recently killed at synagogues in San Diego and Pittsburgh in the United States; US Ambassador David Friedman will be present.

Some 200 Right-wing demonstrators turned out to protest near the joint Israeli-Palestinian Memorial Day ceremony being held at Tel Aviv's Ganei Yehoshua Park. Police held them back behind a fence as they shouted slurs and expletives at the attendees. They also tried to set alight a Palestinian flag.

"How many more terror attacks will occur because of this event? You are legitimizing terrorism," shouted one protester. Others shouted "Kapo" and "Go to Gaza," at the participants. Police arrested two individuals for public disturbances and throwing objects at attendees.

The event was organized by the Israeli-Palestinian NGO Combatants for Peace and the Forum of Bereaved Families for Peace. Initially, the prime minister, who is also defense minister, barred entry to those wishing to attend from the West Bank, but the High Court intervened, as it did in previous years, citing Free Speech, and the decision was overturned. It is the 14th such annual event.

The State of Israel is remembering the 23,741 fallen IDF soldiers and security agents and the 3,150 victims of terrorism since the dawn of the Zionist movement in 1860. Since last year's Memorial Day, 56 Israelis were added to the list and 40 disabled IDF veterans passed away as a result of their injuries in combat. 13 Israelis were recognized as victims of terror in the last year.

The number of civilians killed in hostile actions since 1860 is 4,163, and 3,150 people since the founding of the state. These figures include 120 foreign citizens killed in terror attacks and 100 Israelis killed abroad.

At 11:00 am Wednesday, there will be a two-minute siren while Israelis stand in silence in memory of the fallen. Immediately following, the national ceremony for fallen soldiers will take place at Jerusalem's Mt Herzl Military Cemetery, attended by the president and the prime minister.