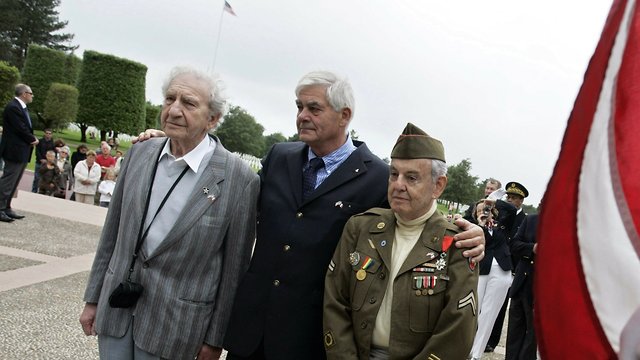 One by one, D-Day memories fade as war's witnesses die

Jewish- American veteran Bernard Dargols died a month before D-Day's the 75th anniversary, and most of his brothers in arms from the landing at Omaha Beach, who helped liberate France from the Nazis, are already gone; Normandy schoolteachers, veterans’ families and military memorials are laboring against time to record survivors’ stories

One more funeral, one less witness to the world's worst war. Bernard Dargols lived almost long enough to join the celebrations next month marking 75 years since the D-Day, 75 years since he waded onto Omaha Beach as an American soldier to help liberate France from the Nazis who persecuted his Jewish family.

Veteran Bernard Dargols, 87, Raymond Mouquet (local mayor), Veteran Arnold Franco, 83 (file photo: AP)
Just shy of his 99th birthday, Dargols died last week. To the strains of his beloved American jazz, he was laid to rest Thursday at France's most famous cemetery, Pere Lachaise. An ever-smaller number of veterans will stand on Normandy's shores on June 6 for D-Day's 75th anniversary. Many will salute fallen comrades from their wheelchairs. As each year passes, more firsthand witnesses to history are gone. Four weeks from now, U.S. President Donald Trump and other world leaders will pay homage to the more than 2 million American, British, Canadian and other Allied forces involved in the D-Day operation on June 6, 1944, and the ensuing battle for Normandy that helped pave the way for Hitler's defeat. Dargols outlived most of them, and knew the importance of sustaining their memory. "I'm convinced that we have to talk about the war to children, so that they understand how much they need to preserve the peace," he wrote in a 2012 memoir. Until the end, Dargols battled complacency, intolerance and Holocaust deniers who claim that D-Day was "just a movie."

A cemetery in Normandy, France, for D-day casualties (file photo) (Photo: Rachel Kedars)
In recent years, "seeing any type of violence, of anti-Semitism and racism, either in France in Europe or in the U.S." really upset him, granddaughter Caroline Jolivet said. Normandy schoolteachers, veterans' families and military memorials are laboring against time to record survivors' stories for posterity. In history's biggest amphibious invasion, on that fateful June 6, some 160,000 Allied forces came ashore to launch Operation Overlord to wrest Normandy from Nazi control. More than 4,000 Allied forces were killed on that day alone. Nearly half a million people were killed on both sides by the time the Allies liberated Paris in August 1944. It's unclear exactly how many D-Day veterans are alive today. The survivors are now in their 90s or 100s. Of the 73,000 Americans who took part, just 30 are currently scheduled to come to France for this year's anniversary. The U.S. Veterans Administration estimates that about 348 American World War II veterans die every day. All but three of the 177 French forces involved in D-Day are gone. Every day, the names of the departed accumulate, tweeted by veterans groups, published in local newspapers. Dargols wanted to be in Normandy this year, it meant a lot to him. His story is both unusual and emblematic: Born in France, he left Paris in 1938 for New York to learn his father's sewing machine trade. He watched from afar, sickened, as the Nazis occupied his homeland. His Jewish relatives were sent to camps, or fled in fear. Determined to fight back but skeptical of French General Charles de Gaulle's resistance force, he joined the U.S. Army instead. With the 2nd Infantry Division, Dargols sailed from Britain on June 5 and only made it to Normandy on June 8, after three interminable days on choppy seas. The road he took inland from Omaha Beach now carries his name. The battle to wrest Normandy from the Nazis took longer than the Allies thought, but for Dargols the prize at the end was invaluable. When he made it to Paris, he went to his childhood apartment and found his mother -- unexpectedly alive.

The coffin of late Jewish French-American World War II veteran, Bernard Dargols (photo: AP)
For four decades, he didn't talk much about the war. But as more and more survivors died, and at his granddaughter's urging, he realized the importance of speaking out and sharing his stories with schools and journalists. Friends and family remembered him Thursday as shy but courageous, a lover of oysters and pastrami sandwiches, known for his mischievous smile. Jolivet, his granddaughter, told the AP of his yearning for leaders who "bring people together, instead of divide them." Dargols would have had a clear message for the D-Day anniversary, she said: "Never take democracy for granted. Dictatorship is always a bad solution. Violence is always a bad solution. Keep democracy alive. Fight for democracy, for freedom, for peace." The cultural director at Normandy's World War II memorial in Caen, Isabelle Bournier, frets about this fading message, as she watches schoolchildren cycle through her museum every day. "The parents and grandparents of 13-year-olds today didn't experience the war, so the family stories, the family history -- where helmets are brought out, where we spoke about what it was like -- has been lost," she said. "They don't know the names of the landing beaches," she says. "Pupils spend less time studying World War II than they did 30 years ago, and so the role of D-Day has been reduced." Dargols himself worried about the day when all the veterans will be gone. "It could start again," he wrote in his memoir. "We must be vigilant, at all times."