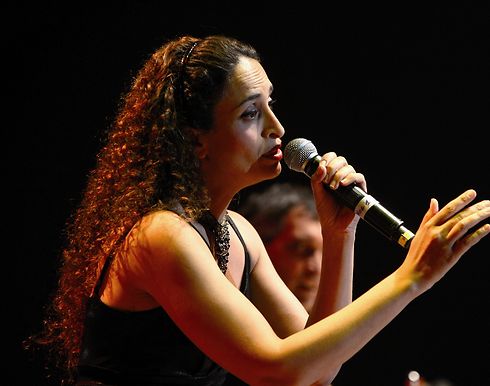 The Tel Aviv Opera house was the unlikely venue recently for a 10pm concert on a Friday night -- although the performing artist was certainly no stranger to prestigious concert halls the world over: Achinoam Nini, this time “and Friends,” presenting her latest show, Letters to Bach.

The “friends” accompanying Nini (aka Noa, her stage name abroad) in concert were an international mix. On her right, I Solis di Napoli, a classical string quartet from Naples, with whom she has had a long professional relationship; and on her left, guitarist Gil Dor, her veteran arranger and musical collaborator, along with two other Israeli musicians, percussionist Gad Seri and bass guitarist Or Lubianiker.

Following two opening numbers sung by by Noa in Italian, she launched into some of her familiar favorites -- e.g. Mishaela and Uri -- culminating in the hypnotic Boi Cala, which had the audience singing along, as Noa herself energetically played the conga drums.

Johann Sebastian Bach was the centerpiece of the program, led off by an instrumental version of Art of the Fugue. The “letters” were songs written in English by Noa herself -- she spent her formative years in New York -- set to Bach compositions. Her flawless rendering of the lyrics while navigating the intricate, timeless baroque scoring was brilliant testimony to the diva’s talent and professionalism. The final third of the concert alternated among songs in Italian, instrumental interludes played by the visiting string quartet, and newer songs in Hebrew, some performed solely by the duo Noa and Dor. And in conclusion, as expected, not one but two encores, in response to the audience’s ovations. Noa’s next performance of Letters to Bach is scheduled for June 6 in Tel Aviv’s Charles Bronfman Auditorium (Zucker Hall).

Avi Singolda is one of Israel’s best guitarists. But don’t take my word for it: I suggest relying on George Martin -- also sometimes referred to as “the fifth Beatle,” for his contributions to catapulting that legendary band to fame -- who tapped Singolda to play a guitar solo when guest conducting the Israel Philharmonic Orchestra.

Judging from the overflow crowd at Singolda’s Passover concert at the Zappa Supper Club and live music venue in Herzliya, Martin’s opinion is shared by quite a few fans in Israel. Moreover, as the audience was soon to discover, Singolda knows how to surround himself with other talented musicians.

The concert was billed as “Singolda and Friends;” and on the stage supporting the lead guitarist were a keyboardist, a drummer, a bass guitarist, and a violinist, plus a male and female vocalist (the violinist was also a second female vocalist). The show had no title, but Singolda informed us at the outset that there would be a lot of music inspired by his guitar idols, as well as classic non-Israeli numbers.

And indeed, the evening started off with well-known songs of James Taylor and The Eagles (Hotel California) -- the difference being Singolda’s versions of both were punctuated by his mesmerizing guitar riffs. The rest of the evening alternated between Hebrew and English numbers, with the audience often joining in singing along, in both languages.

There was also quite a bit of patter by Singolda, much of it revolving around his early life and career, but it never sagged or interfered with the flow of the music. The highlights of the show included performances by the outstanding male (Black Magic Woman) and lead female (Aretha Franklin’s Say a Little Prayer) vocalists, as well as a phenomenal rendition of Stairway to Heaven -- probably the best I have ever heard apart from the original.

A nice gesture by Singolda was his custom of inviting promising young teenage guitarists on stage to perform a solo: on this evening, an impressive young man playing Dire Straits. Towards the end of the concert, Singolda urged the audience to dance, and most of us were happy to oblige.

The next Singolda and Friends concert is scheduled for May 17 at Zappa Tel Aviv.