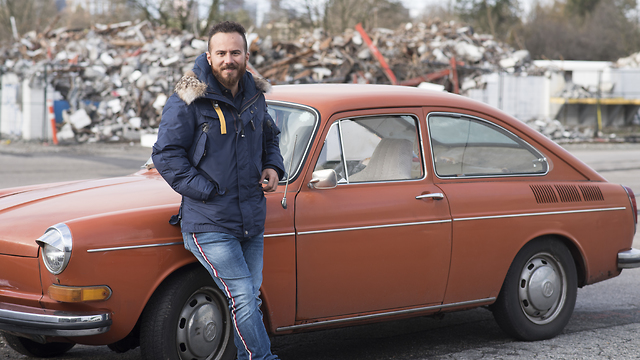 Ahmad Danny Ramadan's family cut ties with him at age 17 when he came out, and it was at this point, he says, he knew he must part ways with his country and his relatives; now he focuses on helping compatriots from the LGBTQ community

Ahmad Danny Ramadan lost his family and his home, but managed to gain his freedom and find his creative voice.

Born in Syria in 1984, the author, refugee and LGBTQ activist was granted asylum in Canada in 2014.

Ahmad Danny Ramadan
“I came out to my family when I was 17 and they didn’t accept it and that was the end of our path together. I left the house and I never went back,” Ramadan says. “I grew up with the knowledge that my society, the religion of my family, my family—all reject the concept of homosexuality,” he says. “But at the same time, that feeling of love towards someone else was the most beautiful feeling that I had.” Ramadan was in Jerusalem last month for the 7th International Writers Festival and International Book Forum, held in a picturesque neighborhood overlooking the Old City. A celebration of literature, the annual event brings together leading Israeli and international authors. This year, the prestigious Jerusalem Prize was awarded to acclaimed American novelist Joyce Carol Oates. Ramadan recalls his harrowing run-in with Syrian authorities and subsequent experience as a refugee.

“I got arrested at the airport in Syria and ended up in prison for around six weeks. Then when they released me, I became persona non grata. I ended up being a refugee in Lebanon,” he says.

Ramadan is also an LGBTQ activist and regularly volunteers with the Vancouver-based Rainbow Refugee organization, which supports people seeking to resettle in Canada.

While the writer mainly focuses his efforts on helping gay Syrian refugees, Rainbow Refugee works with citizens from dozens of countries where homosexuality is illegal.

Gay Syrian activists mock the homophobic ISIS terror group (Photo: Twitter)
Ramadan’s first novel in English, The Clothesline Swing (2017), tells the story of two lovers in the aftermath of the Arab Spring, and was recently translated into Hebrew. “The book is about the wisdom of the elders in the queer community and the complex experience of being a refugee,” Ramadan says. “It’s about resilience within the refugee community as well as the power of nostalgia, love and holding on to a place that now only exists in your mind.” Ramadan draws on numerous sources of inspiration, including works from Gabriel Garcia Marquez and Isabel Allende, as well as Egyptian novelists Radwa Ashour and Mohamed Mansi Qandil. Regarding his trip to Israel, Ramadan stressed that many people demanded he boycott the literary event. “I think that I have critical opinions of the Israeli government, specifically with respect to human rights violations,” he says. But he qualifies his remarks, adding that “multiple other factors play into this complex story. One of them of course is that I don’t have a very high horse to ride on coming from Syria where the government is committing crimes against its own people. “I don’t represent anybody — I’m just myself,” he says. Currently, the author is working on several projects including a novel titled The Foghorn Echoes, which will be published as part of his thesis for the Masters in Creative Writing program at the University of British Columbia.

Ramadan says the book will examine the “lies we tell ourselves and each other to justify the acts of war and the acts of conflict that we cause upon one another.”