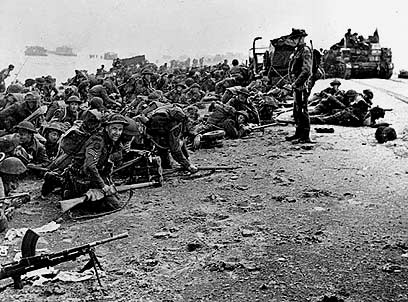 D-Day still takes an emotional toll on vets, 75 years on

Whether you call it post-traumatic stress disorder, survivor's guilt or simple grief, the events of June 6, 1944, still mark the lives of the men who fought on the beaches of Normandy to free Europe from the Nazi regime

The night before the D-Day landings, Emmings and his shipmates on a Royal Navy landing craft learned their mission was to ferry 36 Canadian troops to Juno Beach, a stretch of Normandy coast fortified with artillery, mortars, mines and machine gun emplacements. The men made a pact: Whatever happened, they would look after those who didn't make it back.

The next morning, the teenage British coxswain pointed his landing craft at the French shoreline and gunned the engines through meter-high (3-foot) waves as gunfire and explosions filled the air. The boat struck a mine but made it to the beach, where the crew discovered the ramp was jammed.

Soldiers who just landed in Normandy on D-Day (Photo: AP)

Emmings and another crewman climbed over the side to free it.

"I got back on the craft but he didn't," Emmings told The Associated Press. "That's the reason I go over there, because we made that promise and I've tried to keep it up every year. It still brings a tear to my eyes, even now, when I talk about it."

Emmings, now 94, will honor his pledge once again on June 6, when he joins the dwindling cohort of D-Day veterans and dignitaries from around the world to commemorate the 75th anniversary of the invasion that marked the beginning of the end for Nazi Germany.

But he doesn't need the anniversary to remember D-Day -- it's a trauma that Emmings will never forget.

Whether you call it post-traumatic stress disorder, survivor's guilt or simple grief, the events of June 6, 1944, still mark the lives of the men who fought on the Normandy beaches. The emotions are even more pronounced this year, as the dwindling cohort of aging survivors prepare to take part in what may be the last major commemoration of the landings that marked the beginning of the end of Nazi Germany.

As difficult as it is for the veterans to talk about their experiences, they know they are running out of time to tell their stories. All hope that future generations will remember the sacrifice of those who died. They often weep, or stare off in the distance as they describe how ordinary people did extraordinary things.

"Coming to the end of their lives, these guys are reflecting on, 'What have I done that was worth anything? Was it a waste? Do I have anything that I can point to?'" said Frank Farley, a psychology professor at Temple University in Philadelphia and an expert on heroism. "Their resume has D-Day on it, and they can hang a lot on that. That is valued."

Emmings would tell you himself he's an ordinary guy who became a husband, a father of two and a forester, dedicated to expanding and protecting the nation's woodlands.

Born and raised in the village of Shere, 30 miles (48 kilometers) southwest of London, Emmings had never been out of the country when he was assigned to the first wave of the assault on Juno Beach, where 359 Canadian soldiers would die.

Soldiers on a sea landing craft on their way to Normandy (Photo: AP)

His superiors didn't seem to worry about what would happen once the landing craft were lowered into the water, as long as the coxswains kept heading for the beach 6 miles (10 kilometers) away.

Emmings scanned the horizon and picked out the landmark he had been told to aim at: a large house on the seafront at Bernieres-sur-Mer and the bunker to its left.

"It looked a bit frightening on the way in, because they were still shelling then and they were dropping stuff on the beach and whatever and there was still quite a bit of firing going on," he recalled. "It seemed murderous, if I may use that word, to let the guys run ashore when they're going to go in under heavy (bombardment)."

Things quickly went bad for Emmings and his passengers.

Damage from the mine explosion slowed the boat and jammed the bow ramp, forcing Emmings and a crewmember into the water where they struggled to free it. The commotion attracted the attention of Germans in the bunker, and the Canadians were cut down as they left the craft.

As the boat left the beach and headed back out to sea it hit another mine, and another crewmember was killed. Emmings and his crew struggled on, but the landing craft sank before it reached the mother ship. They were eventually picked up by a passing landing craft.

"You didn't have time to be scared, not really. I never even (gave) it a thought that I could get shot," Emmings said. "When I think about it, I think I was bloody lucky, you know, especially when the craft got hit, and you see a guy that dies in front of you more or less.

One Canadian in particular, an officer who was shot down as he tried to cross the beach, haunts the old sailor's memories. Emmings wanted to tell the officer's family what he saw, but he didn't know the man's name.

But Emmings has kept his promise to his crew.

His hair is now a thatch of silver, and he walks with a pair of canes. But he is adamant about the need to just keep talking about D-Day, no matter how painful it is to remember. And he goes to Normandy every year to honor his shipmates and put crosses on their graves.

"I will do these interviews, hoping that somebody will read it and remember it every year," he said. "This must never be left to die. D-Day, it must always be there. You've got to remember all those guys."