A train on the Ben-Gurion Jerusalem route (Photo: AFP) 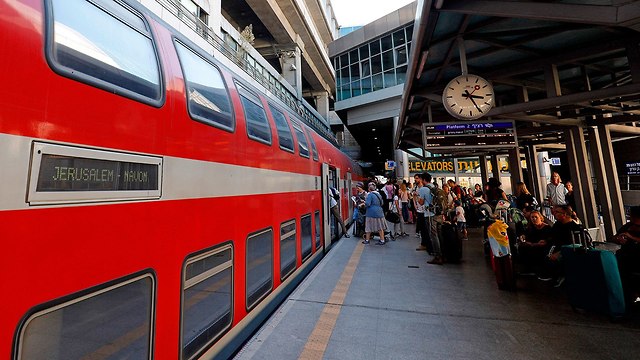 Fast train from Ben-Gurion to capital reduced to one an hour due to malfunction; line later held up when train breaks down on track with 300 passengers on board

Israel Railways announced Sunday morning that it was temporarily reducing the number of trains on the express line from Ben-Gurion Airport to Jerusalem to just one every hour because due to a malfunction of the control systems serving the line.

Shortly after the announcement, the only express train on the line got stuck on the tracks with 300 passengers on board due to an air pressure problem. The fault was repaired by the crew, and a replacement engine that was dispatched for the train was deemed unnecessary, and the locomotive continued on its route.

This was the first malfunction on the express line in a month. However, there have been mulitple serious problems with the line since it started last September.

Despite the repeated mishaps on the line, Israel Railways says more than 1.6 million passengers have already used the train.

The malfunctions on the Ben Gurion-Jerusalem line come after a series of delays and cancellations across the entire country on Thursday.

These issues included the cancellation of south-bound trains from Tel Aviv and the breakdown of a train from Be'er Sheva to Nahariya en route. Its passengers had to be transferred to other trains and make various connections in order to reach their destinations.

Passengers waiting for trains at a Tel Aviv station on Thursday

Israel Railway apologized for the inconvenience and said that the 800 passengers on board were eligible for compensation that would be paid onto their electronic tickets.

Delays were also felt in the northern city of Haifa and its surroundings, when a train stopped at Bat Galim train station due a mechanical problem. A new engine was dispatched to the train.