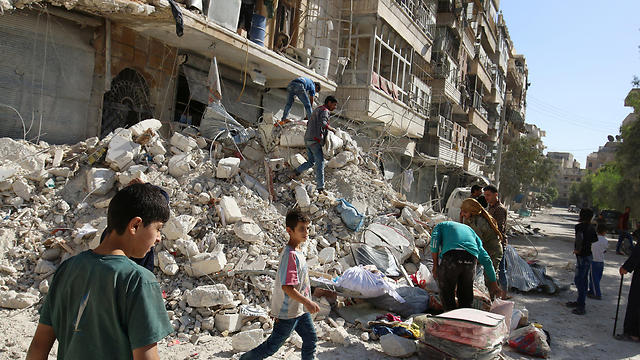 Aleppo's scattered business owners have yet to return home

Syrian recovery from a devastating civil war depends on return of industry, but in the war-torn city's Khan Khair Bek complex, only two of 41 shops have reopened as owners go abroad or to other parts of the country

In the old khan, a stone courtyard off Aleppo's medieval souk, most of the 41 cloth shops are deserted. Many of the owners moved elsewhere or went abroad to escape fighting in the historic Syrian city, a major economic centre before the war.

"Some started new work outside Syria and won't return. Some who stayed opened new shops in other parts of the country," said Mohammed Abu Zeid, one of two cloth merchants still operating.

Syria's economy has been upturned by eight years of war that partitioned the country between rival forces and displaced millions of people. Hundreds of thousands of workers were conscripted into the army or joined rebel groups and Western powers have imposed sweeping sanctions.

Any recovery will largely depend on whether people return home, including local business owners. The empty stores in Khan Khair Bek complex show that most have stayed away and it may be some time before business resumes.

Although parts of western Aleppo, which was held by the government through the war, still have busy shopping areas, the city's factories and wholesale trading businesses have been devastated by war damage and the departure of traders.

Textiles were a mainstay of Aleppo business until the start of the war in 2011. The khan in the Souk al-Zarb section of the battered Old City was a textile hub. Merchants kept their wares and conducted wholesale business in the shops. When Reuters first visited in early 2017, weeks after the fighting ended, the khan was closed and the domed entranceway was waist-deep in debris including bullet casings and the tail fin of a mortar bomb.

Thirteen shop owners moved abroad, mostly to Egypt or Turkey. Of those still in Syria, six moved to Damascus or other cities, and started new businesses. Another seven who remained in Aleppo have also stopped dealing in cloth, Abu Zeid said.

Ten others are working in the cloth trade from market stalls or rented shops in other parts of Aleppo. Just two, Abu Zeid and Zakariya Azizeh, reopened in the khan earlier this year. They did not know the whereabouts of several other neighbours.

About half Syria's pre-war population of 22 million were uprooted during the conflict, with more than 5 million seeking refuge abroad.

Some refugees have started returning, but most are unwilling to go back yet, citing a fear of reprisals, the danger of renewed conflict, economic hardship and problems with paperwork.

Azizeh said he was trying to persuade his former neighbours to come back.

"We cannot export and we have banking problems from sanctions. The system depends on credit, but I haven't any money," he said.

President Bashar al-Assad said Syria now faces an economic war waged through Western sanctions. They make any movement of money in or out of Syria very difficult, paralysing trade even with close allies such as Russia and Iran and making any return to Syria less attractive for business owners.

Abu Zeid believes most of the those who left the khan will eventually return. Many still own their premises.

"This is the best khan for import-export. The others, they tell us 'one month, two months, we will come back'," he said.

His cousin, Ahmed Abu Zeid, 63, a cousin of Mohammed Abu Zeid, has continued doing some business from home as it would cost several thousand dollars to replace stock and repair his war-damaged shop, near a mulberry tree.

"We all worked here from when we were children. I used to climb this tree and so did my son," he said. He hopes his grandson Ahmed, 8, will one day work there too.

The two main centres of Aleppan business - the Old City souk and the industrial zones on the city's outskirts - were on the front lines and suffered from heavy shellfire and looting.

Shops and warehouses were stripped of their inventories, factories and workshops of their equipment and machinery. Many are pocked with bullet or shell holes and filled with rubble.

Aleppo's power plant was destroyed and electricity supplies from other parts of government-held Syria are limited. Water provision is patchy. One of the main industrial zones, Belleramoun, is near a front line and has been repeatedly shelled by rebels.

In the souk outside the khan, a group had gathered to chat on plastic chairs. They recited lists of friends and neighbours who had left.

"Some of them have come back to see what the situation is like. When they see it, they go away again," said Mohammed Fadel, dressed in a suit and waving a lit cigarette as he spoke.

He had two shops in the souk, both now closed, and a textile workshop with four machines and 400 workers running round the clock and exporting across the Middle East, Fadel said.

He now plans to leave Syria and go to live in the Netherlands, where his son is.

"What can I do? I sit here all day doing nothing," he said.