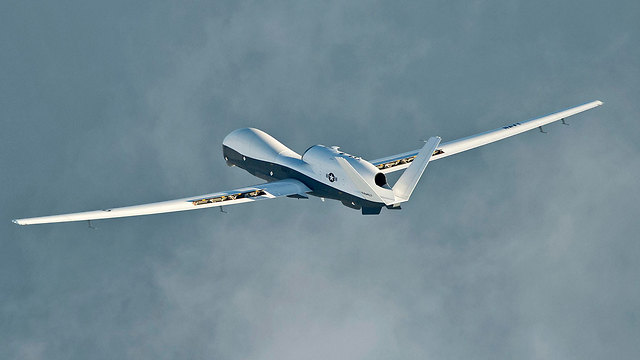 The army issues official statement, confirming what they say was 'an unprovoked attack on a U.S. surveillance asset in international airspace,' Iranians, meanwhile, insist the UAV was over the country's territory and call the downing 'a message' to its enemy

The U.S. military officially confirmed on Thursday that one of its drones was shot down but said the incident took place in international airspace, challenging Iran's account that the U.S. aircraft had been flying over Iranian territory.

Earlier on Thursday several Iranian state news agencies said a U.S. "spy" drone was shot down over the southern Iranian province of Hormozgan which borders the Strait of Hormuz - a critical artery for global oil supplies - claiming it entered Iran's airspace.

"Iranian reports that the aircraft was over Iran are false," said Navy Captain Bill Urban, a spokesman for the U.S. military's Central Command. "This was an unprovoked attack on a U.S. surveillance asset in international airspace."

A Revolutionary Guards statement said the drone's identification transponder had been switched off "in violation of aviation rules and was moving in full secrecy" when it was downed, Iranian state broadcaster IRIB reported.

The Iranian Foreign Ministry condemned what it called a violation of Iranian air space by the drone and warned of the consequences of such "illegal and provocative" measures.

A U.S. official, speaking on condition of anonymity, said earlier the drone was a U.S. Navy MQ-4C Triton and that it had been shot down in international air space over the Strait of Hormuz, through which about a third of the world's seaborne oil exits the Gulf.

The MQ-4C Triton's manufacturer, Northrop Grumman, says on its website that the Triton can fly for over 24 hours at a time at altitudes higher than 10 miles (16 km), with an operational range of 8,200 nautical miles.

Brigadier General Hossein Salami, commander in chief of the Revolutionary Guards, warned against any aggression and said the drone's downing carried a "clear message" to Iran's arch-enemy.

"Our air space is our red line and Iran has always responded and will continue to respond strongly to any country that violates our air space," Ali Shamkhani, secretary of the Supreme National Security Council, told Iran's Tasnim news agency.

The U.S. sanctions net draped over Iran, designed to reduce its lifeblood oil exports to zero and sever it from the dollar-dominated global financial system, have wrought severe damage to Iran's economy.

U.S. President Donald Trump has dispatched forces including aircraft carriers, B-52 bombers and troops to the Middle East over the past few weeks. Iran said last week that it was responsible for the security of the Strait of Hormuz, calling on American forces to leave the Gulf.