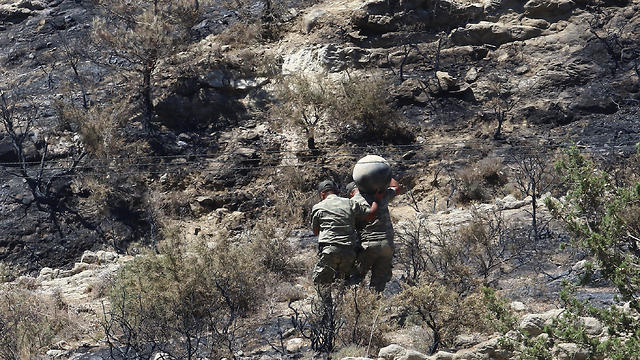 Turkish Cypriot officials say Russian-made missile that was part of an anti-aircraft battery is what caused an explosion outside a village in the country's breakaway north; blasts shook the divided capital Nicosia several kilometers away

A Turkish Cypriot official said Monday that a Syrian anti-aircraft missile trying to fend off an alleged Israeli raid missed its target and hit ethnically divided Cyprus, causing an explosion outside a village in east Mediterranean island notion's breakaway north. No injuries were reported.

Intensive Israeli airstrikes, reportedly targeting Syrian government targets and Hezbollah bases near the Syrian-Lebanon border around 120 miles (200 kilometers) away, were taking place at the time of the blast at around 1 a.m. local time. The Syrian London based Observatory for Human Rights said at least 15 people had been killed in the strikes.

Military personnel carry debris on a slope where a missile struck, in Tashkent (also known as Vouno), in northern Cyprus, July 1, 2019

Kudret Ozersay, the north's foreign minister, posted on his personal Facebook account that an initial assessment of the pre-dawn blast indicated that a Russian-made missile that was part of an anti-aircraft battery had missed its target during overnight airstrikes

in the central province of Homs and suburbs of Damascus.

Ozersay said the missile likely blew up in flight because there was no impact crater and pieces of the object were found several kilometers from the main debris field outside the village of Tashkent, or Vouno, as it's known by its Greek name. He said the writing on debris matches that found on pieces of a Russian-made S-200 missile that crashed in Gaziantep, Turkey, in July 2018.

Explosion caused by Syrian anti-aircraft missile (Photo: Cyprusmail)
According to Turkish Cypriot broadcaster BRT, Prime Minister Ersin Tatar said no one was hurt in the explosion and that firefighting crews have contained a blaze that the burning debris had ignited. Police have cordoned off the main debris field and other locations in nearby villages where more pieces of debris have been found. The explosion even shook residents of the divided capital Nicosia several kilometers away.

Cyprus was split in 1974 when Turkey invaded following a coup by supporters of union with Greece. The country's internationally recognized government is seated in the Greek Cypriot south. Only Turkey recognizes a Turkish Cypriot declaration of independence and keeps more than 35,000 troops in the north.