The Car being jumped on and then set on fire
Photo: Reuters 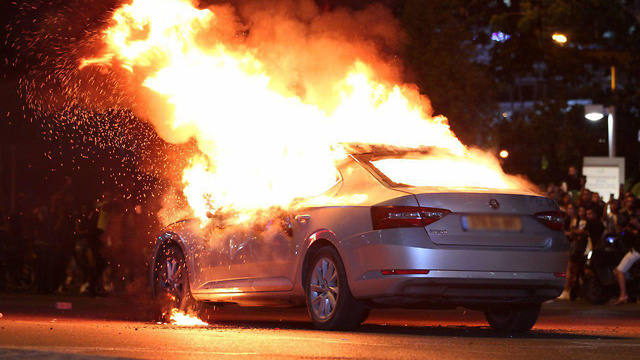 Driver attacked by Ethiopian protesters: I saw my death before me

27-year-old Netanya resident says he was afraid of being 'lynched' by demonstrators at Tel Aviv's Azrieli Junction who jumped atop his vehicle, tried to smash the windshield and eventually set the car ablaze

The driver whose car was jumped on mid-drive and later set ablaze during Tuesday’s demonstrations by Ethiopian community in Tel Aviv said he feared he would be “lynched” and “saw my death right before me.”

The protests erupted over the killing of a teenager of Ethiopian origin in Haifa by an off-duty policeman on Sunday. The protests, which swiftly turned violent, were held at major interchanges and roads across the country on Tuesday evening, after the funeral for 19-year-old Solomon Tekah.

The 27-year-old resident of the central city of Netanya was trying to escape the hours-long traffic jam at the Azrieli Junction, where the demonstration was taking place. But, once he was able to break free from the traffic jam, several protesters jumped on top of his car, trying to smash the windshield.

"I left the office and tried driving along Kaplan Street, which wasn’t blocked to traffic by the demonstrators," said the driver in an interview with Ynet.

Car being attacked in Tel Aviv

“I didn’t see any police officers at the interchange so I assumed the demonstration was over. When I stopped at the traffic light, I was surrounded by several protesters,” he said. “I started driving slowly to the side of the road in order to avoid harming the demonstrators, and that’s when the unprecedentedly violent incident started.”

He said one of the demonstrators leapt on top of his car and started punching the windshield.

“I put my foot on the gas in order to get him off the vehicle,” said the driver.

Protesters jump atop of the car (Photo: Hadmama)

He said dozens of others joined in on the attack, jumping on the vehicle and hurling rocks at the windshield. “They completely destroyed the car,” he said.

The driver said he had two options, either to continue driving and possibly run over some protesters or “get out of the car and be lynched.”

He said he decided to remain in the vehicle and wait until security forces rescued him.

"Four undercover policemen emerged from the crowd and saved me,” he said. “As we were fleeing, the protesters pelted us with rocks and bottles and sprayed us with pepper spray.”

The driver was taken by the officers to the nearby government building, while his car - which he’d leased - was set on fire by the demonstrators.

One suspect, also a Netanya resident, was arrested on suspicion of arson in the attack. The court extended his remand on Wednesday morning.

“Anyone who’s capable of setting fire to a vehicle in a public place, even if it’s an act of protest, presents himself as a danger to society,” the court said in a statement.