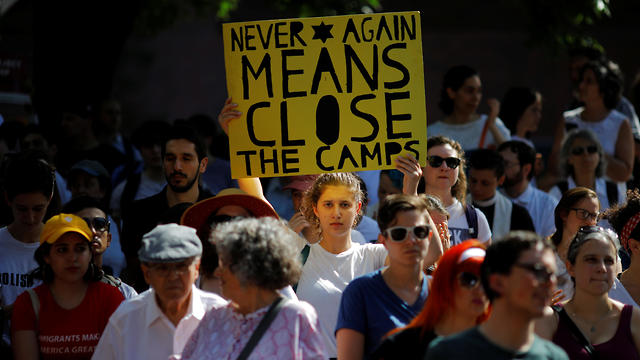 Rabbi at Orange County protest says community 'benefited a lot from this country' and has obligation to ensure 'borders remain open to people seeking refuge from violence and poverty'; demonstrations planned for holiday, including in Philadelphia, where Jewish activists liken detentions to treatment of Jews by Nazis

Amid the row over whether American detainment facilities for migrants are concentration camps or not, and as cries to #CloseTheCamps take root on social media, Jewish groups are joining hundreds protesting from Rhode Island and Vermont to Texas and California, as the U.S. celebrates its own independence.

About 50 demonstrators from a Jewish group congregated Wednesday outside a jail in Orange County where immigration detainees are held. Some locked arms and blocked the facility's entrance. Then they sang and prayed for immigrant children who have died in government custody.

"The Jewish community has benefited a lot from this country as an immigrant community, and we have an obligation to make sure torture doesn't happen and that borders remain open to people who are seeking refuge from violence and poverty," said Aryeh Cohen, a rabbi and professor who joined the protest.

Still more demonstrations were planned for the July 4 holiday, including one being organized in Philadelphia by Jewish activists likening the detention of migrants to the treatment of Jews in Nazi Germany.

"Inhumane." ''Shameful." ''Intolerable." ''Brutal." Mounting revelations about squalid and dangerously overcrowded conditions at Border Patrol holding centers have fueled public outrage heading into the Fourth of July weekend, with protesters taking to the streets and social media to decry the situation as un-American and unacceptable.

16 JEWS SHUTTING DOWN THE THEO LACY FACILITY IN SOUTHERN CALIFORNIA. When we say #NeverAgain we know that #NeverAgainIsNow pic.twitter.com/P3j0qtql25

The swelling furor over President Donald Trump's immigration polices comes as the administration said Wednesday that it is looking for more properties to permanently hold unaccompanied children who cross the border.

Jerry Gonzalez, executive director of the Georgia Association of Latino Elected Officials, called that troublesome given the government's "track record on abuses and child neglect that we have seen nationally." Atlanta is one of five potential locations for new facilities to hold up to 500 children.

"I don't think that this administration is capable of administrating a program in a humane way," Gonzalez said.

Headlines and searing images made public in past days and weeks have served as a stark reminder for Americans far from the border of a crisis for which solutions seem scarce: An immigrant father and daughter drowned in the Rio Grande.

Reports that infants, children and teens have been locked up without adequate food and water. Revelations that five children have died in Border Patrol custody since December.

Oscar Alberto Martinez and his 23-month-old Angie Valeria Martinez drowned in June trying to cross the Rio Grande River in order to enter the U.S. from Mexico (Photo: AFP)
The Homeland Security Department's internal watchdog provided new details Tuesday about severe overcrowding in Texas' Rio Grande Valley, the busiest corridor for illegal crossings, noting children at three facilities had no access to showers and that some children under age 7 had been held in jammed centers for more than two weeks. Some cells were so cramped that adults were forced to stand for days on end. Government inspectors described an increasingly dangerous situation, both for migrants and agents, with escape attempts and detainees clogging toilets with socks to get released during maintenance. A "ticking time bomb," in the words of one facility manager. The report echoed findings in May by the department's inspector general about holding centers in El Paso, Texas: 900 people crammed into a cell with a maximum capacity of 125; detainees standing on toilets to have room to breathe; others wearing soiled clothing for days or weeks.

Overcrowding of families at U.S. Border Patrol McAllen Station in Texas, June 10, 2019
It all comes as Trump promises the "show of a lifetime" for the hundreds of thousands of revelers who flock to the National Mall every year on the Fourth of July. Tanks are in place for the display of military muscle. Independence Day, said Democratic Sen. Dianne Feinstein of California, is "a time to celebrate the birth of our country and the founding principles for which it stands. But it's hard to believe anyone feels much pride when they see the images coming out of Border Patrol facilities. Compared to the ideals set out in our founding documents and inscribed on the base of the Statue of Liberty, the situation on our southern border feels like hypocrisy." Trump said Wednesday that Border Patrol agents are "not hospital workers, doctors or nurses" and again blamed Democrats for rejecting his proposals to fix the immigration system. "If illegal immigrants are unhappy with the conditions in quickly built or refitted detention centers, just tell them not to come. All problems solved!" the president tweeted.

Customs and Border Protection reported in mid-May that it had 16,000 people in its custody, many in cells equipped with nothing more than concrete benches and an exposed toilet. Immigration and Customs Enforcement, whose facilities are built for longer-term detention, houses more than 40,000 people.

When government inspectors visited the Rio Grande Valley last month, the Border Patrol had some 8,000 detainees in custody in just five holding facilities, with 3,400 held longer than the 72 hours generally permitted. More than 800 children had been in the facilities for longer than 72 hours, with many there more than a week.

At that same time, longer-term ICE facilities, to which detainees are supposed to be moved, had some 54,000 beds occupied nationwide, though it is funded only for 42,000.

"We are concerned that overcrowding and prolonged detention represent an immediate risk to the health and safety of DHS agents and officers, and to those detained," the inspector general's report states. Included were photos showing women and children, including an infant in diapers, piled shoulder to shoulder on the floor of one holding pen.

Another photo showed some 88 men crammed into a cell meant for 41, with one pressing a cardboard sign to a window reading: "Help, 40 Days Here."

Demonstrators take part in the Never Again Para Nadir protest, led by Jewish groups, against ICE Detention camps in Boston, July 2, 2019.
On Monday, Trump signed legislation to provide $4.6 billion aimed at improving conditions. And the Department of Health and Human Services, which takes custody of unaccompanied children from the Border Patrol, said Wednesday that additional holding sites are being assessed in and around Atlanta, Phoenix, Dallas, Houston and San Antonio, Texas. The department is seeking 20-year leases for most of the sites, signaling they don't expect challenges to fade. Kevin McAleenan, the acting Homeland Security secretary, noted that arrests on the Mexican border were expected to drop 25% in June from a month earlier, which would end an alarming string of monthly increases in family arrivals -- largely from Central America's Northern Triangle of Guatemala, Honduras and El Salvador -- and be consistent with a seasonal trend for illegal crossings to fall during dangerously hot summer months. Nevertheless, Trump is promising that raids to detain immigrants already in the country illegally -- delayed from last month-- will take place after the July 4 holiday, meaning still more space would be needed to hold still more people. ICE agents are supposedly prepped and ready for sweeps across the U.S. "After July 4," Trump told reporters earlier this week, "a lot of people are going to be brought back out."