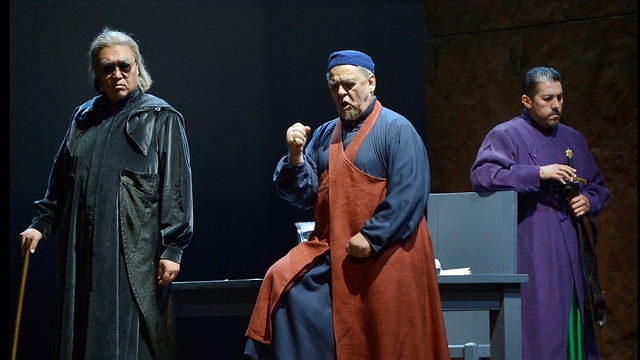 The 2018-19 season of the Israel Opera is drawing to a close in Tel Aviv this month, with the performance of an opera that is not common in international repertoires: Simon Boccanegra, by Giuseppe Verdi.

In fact, it is such a rare occurrence that it was performed in Israel only once before -- and that was way back in 2003. (By contrast, Verdi himself is very popular in this country: this tale of the pirate turned doge of Genoa is the second opera by the 19th-century Italian composer this season alone.)

It is perhaps not altogether surprising, therefore, to learn that Simon Boccanegra was slow to catch on in the English-speaking world. The British premiere, for example, did not take place until 1948, almost a century after it debuted in Italy. T

he current Israeli production -- under the guidance of British director David Pountney (who has directed Verdi in this country before, and recently directed The Passenger earlier this season) -- was originally created by the Welsh National Opera.

Other overseas artists with rich histories of appearing with the Israel Opera are returning as well, starting with Italian conductor Giuliano Carella, wielding the baton with the Opera Orchestra, the Israel Symphony Orchestra Rishon Lezion.

Indeed, Carulla did a masterful job, as instrumental interludes created moods of tension and suspense during the plot twists, replete with treachery, jealousy and rage. Carulla will be spelled at the podium by Nimrod David Pfeiffer for two performances in the final week of the current run.

The three leading roles were also sung (on the occasion of the premiere) by visiting artists who have appeared previously with the Israel Opera: Romanian baritone Ionut Pascu in the role of Simon, Mexican tenor Hector Sandoval in the role of Gabriele, and Romanian soprano Aurelia Valerian in the role of Amelia.

All three roles (and lesser ones as well) are being alternated with other performers, including returning Italian tenor Vitorio Vitelli (as Simon) and Ukrainian tenor Mykhailo Malafi (as Gabriele). The only Israeli to feature as an alternate in a leading role is soprano Alia Vasilevitsky (as Amelia), the (Russian-born) graduate of the Israel Opera’s Meitar Opera Studio.

Pascu was excellent as Simon, singing and acting the role with power and passion. In addition, the duet sung by Sandoval and Valerian in Act I was one of the highlights of the performance, along with several thundering occasions when the entire chorus sang.

Still, there were things in the production that were perplexing. One was the costuming. I am no expert in 14th century Italian fashion, and maybe the common people did dress in what looks today like butcher’s aprons.

But why is Pietro -- Simon’s kingmaker, and obviously a wealthy man, since the opera calls him greedy and he is at home in the palace -- dressed throughout like one of the rabble?

Simon Boccanegra at the Israel Opera in Tel Aviv (Photo: Yossi Zwecker)
One of the few bits of color in the citizenry’s clothing is the deep red worn by the members of the Council -- but why are they walking around on stilts? And why does their tonsorial styling resemble ancient Assyrians? Finally, the death scene at the end is about the strangest I have ever seen in an opera: fatally poisoned, Simon’s death throes are prolonged -- yet he is standing, and remains on his feet, the whole time, including at the bitter end.

Nevertheless, these quibbles should not prevent anyone from enjoying an opera that is rarely seen -- and if past history is any judge -- may not return here for years to come.

Simon Boccanegra runs at the Israel Opera in Tel Aviv through July 19, 2019.