Thai food at the Sheraton 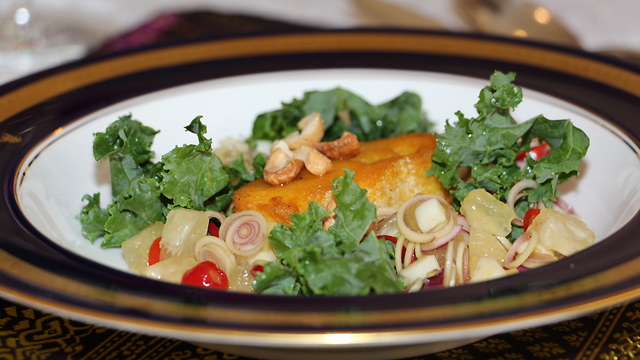 The Sheraton celebrates exotic Asian cuisines, while the Hilton salutes Israel with new and creative cocktails

The Sheraton Hotel Tel Aviv, which has a reputation for bringing international ethnic food festivals to Israel’s kashrut-observing public, held two such successful festivals this summer, featuring South Asian cuisines that have become popular with Israel: Thai and Indian. At the end of June, the hotel’s signature restaurant The Olive Leaf, was home to a five-day Kosher Thai Food Festival 2019, co-sponsored by the Royal Thai Embassy in Tel Aviv. In addition to the authentic Thai cuisine, the art of Thai fruit carving -- as a reflection of Thai culture -- was on display.

Thai food at the Sheraton
The festival was launched by H.E. Ms. Penprapa Vongkovit, the ambassador of Thailand to Israel, and the food menu prepared by the chef of the Royal Thai Embassy in Israel, in collaboration with Chef Shimon Maman, executive chef of the Sheraton Tel Aviv. The nightly dinner during the festival consisted of a fixed five-course menu. The cost was NIS 200, including a glass of house wine. The meal started with an amuse-bouche, intriguingly named Golden Bag: a solitary dumpling filled with chicken, smoked goose breast and mushroom. The crispy tofu wrap was a beautiful golden brown, while the filling was juicy and flavorful. The soup course was Tom Kha Hed, a spicy coconut soup with mushroom, galangal and lemongrass. The delicious pale broth was chock full of meaty mushrooms of several varieties. The fish course was grilled sea bass with chili, lemon grass, kaffir lime leaves, red onion and mint. The firm white fish, served on a bed of kale, was perfectly cooked, while the condiments enhanced the ocean fish without overpowering it. The main course was Massaman Chicken Curry, made with coconut milk, potato, peanut and onion, and served with jasmine rice. The mild curry sauce was outstanding, and I would have gladly liked more of it. Dessert was tapioca pearls and sago cantaloupe in coconut milk, with fresh herb sorbet -- a perfect light, sweet and refreshing finale to the meal. Israel is blessed with lots of non-kosher Thai restaurants, and this kosher meal was as good as you would find in any of them.

The memory of the Thai festival was fresh in everyone’s mind when the hotel’s Taste of India festival took place in the second week of July. The guest chef was a veritable star from India: Shipra Khanna, winner of that country’s MasterChef competition.

Indian culinary week at the Sheraton

Celebrity Chef Khanna was introduced to the Israelli public at a gala reception and dinner held at the Sheraton to kick off the festival.

The opening evening, hosted by the Indian ambassador to Israel, H.E. Pavan Kapor, was emceed by Israeli actor Dvir Benedek. Other dignitaries who spoke at the event were Amir Halevi, director general of the Ministry of Tourism, and Franco Vella, general manager of the Sheraton Tel Aviv.

The highlight of the evening was a lavish buffet, prepared by Chef Khanna, that was a preview of the three-course dinners that were served during the course of the festival.

The feast reflected the rich tapestry of the many cuisines that make up the vast Indian subcontinent, with dishes from regions extending from the Sikh provinces of the northwest and the highlands of the Himalayan Mountains to the balmy coast of the Indian Ocean.

There were plenty of salads among the starters, and fittingly, lots of vegetarian options. Among the more memorable entrees were Amritsari fish cooked tandoori-stye; chicken seasoned with pickle from Rajasthan; and that ubiquitous staple, daal fry lentils.

Those who were smart enough to save room for dessert were treated to moong and almond halwa; besan ladoo, a sweet made from hummus flour; and mango ambua, a sweet-and-sour delicacy based on that heavenly fruit.

The Tel Aviv Hilton is welcoming summer with an innovative slate of 11 distinctive cocktails, created exclusively for the hotel by mixologist Shahar Kreisler. The inspiration for these cocktails are the diverse regions of Israel, ranging from Safed in the north to the Dead Sea in the south, with special ingredients or herbs from each different area imparting unique characteristics and flavors. As I perused the cocktail list, I sipped what the bartender told me was the bar’s most popular drink: the Hilton Beach -- a classic tiki cocktail blending rum, lychee liqueur, coconut, mint, cherry and cinnamon, served in a Polynesian style ceramic mug. It goes down easy, but can pack a punch.

Cocktails at the Hilton

If one is going to drink alcohol, then it is a good idea to eat. Fortunately, the Lobby restaurant has a revised menu, featuring new dishes created by the Hilton’s executive chef Rafik Jabarin.

The updated menu comprises six sections: Appetizers, Soups, Salads, Main Courses, Side Dishes and Desserts. As a kosher dairy menu, there are plenty of vegetarian options. I started with the cheese soufflé listed in the appetizer category -- two miniature soufflés containing a rich mixture of blue cheese, cheddar and Parmesan, served on a beetroot and pesto celery cream that enhanced the soufflés nicely. As a main course, theJapanese salmon in teriyaki sauce, encrusted with black and white sesame seed crust, and accompanied by bok choy and cellophane noodles, turned out to be a good choice.

Salmon at the Hilton
I washed the food down with a second cocktail from the Hilton’s unique list: the Dead Sea -- tequila, strawberry, pineapple, lemon, chili, mint and, of course, salt. It was as enjoyable as the first.

For a change, however, I ordered from the printed menu: pistachio baklava with ice cream.

Dessert at the Hilton

Unlike what I had imagined -- pastry a la mode -- the scoop of vanilla ice cream was actually sandwiched between the top layer of crispy phyllo and the lower layer of crunchy nuts.

As a thank you to patrons, the Hilton offers discounted parking in its otherwise expensive parking lot, so don’t forget to get your ticket validated.