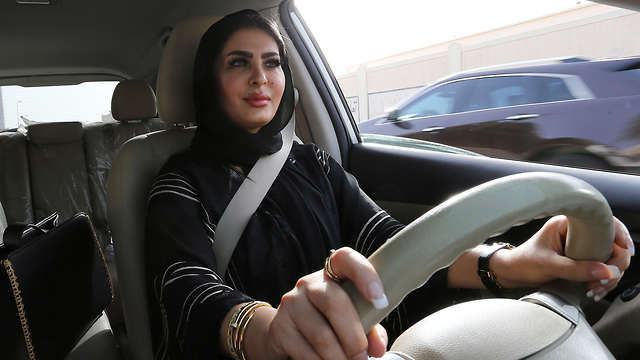 Saudi Arabia taps into a long-sidelined asset - its women

Changes in traditionally conservative kingdom mean women will soon be able to obtain a passport without being required to first have the consent of a male relative and will have the same rights as men in matters of work, leisure, finance, law and health

With an eye on its shifting economy, Saudi Arabia’s Council of Ministers has approved new regulations easing restrictions on women regarding travel, work and social security.

The Sunni Muslim kingdom’s official newspaper published details of the amendments – expected to go into effect at the end of this month – which will allow Saudi women to obtain travel documents, including passports, without being required to first obtain the consent of a male relative.

A ban on women drivers in Saudi Arabia was recently relaxed (Photo: EPA)

Women will now also have the same rights as men in matters of work, leisure, finance, law and health.

Khaled Batrefe, a professor of psychology at Alfaisal University, said that women’s rights began to improve during the reign of former Saudi King Abdullah, who allowed women to vote and to run in municipal elections. “King Abdullah began the journey of empowering women with great strides,” said Batrefe, “and this has accelerated in recent years under Crown Prince Mohammed bin Salman whose reforms have directly impacted the lives of women.” He said that Saudi women now have the right to an education, to travel without a male companion and to drive, in addition to “being able to work in places that nobody imagined they would reach. These changes are all part of Vision 2030.” That plan, formulated by bin Salman, aims to diversify the Saudi economy, making it less dependent on oil. A central part of Vision 2030 is for Saudi women to work across a broad spectrum of industries, as opposed to being limited to such sectors as education. Riyadh has publicly committed to increasing the rate of female employment from 22 percent to 30% by reforming both the economy and legal system. Batrefe said that while a majority of Saudis welcome the reforms, a vocal minority of ultra-conservative Sunni Muslims object, seeing the changes as something that harms the traditional role of women. “Under the reforms, it’s a matter of freedom of choice,” Batrefe argued. “Each person can now make the decision that’s right for their situation. Those opposed to the reforms don’t have to implement them, but they shouldn’t deprive others.”

Women in Saudi Arabia (Photo: Reuters)
Haya, a Saudi national living in Riyadh, spoke on condition of anonymity. She said that it will take time for some segments of the population to adjust to the changes but urged all women in the country to quickly embrace them. “I feel like we have an equal opportunity in some fields. I understand it’s not easy to change a society at once. But eventually it will happen,” Haya asserted. Samar al-Mogren, a Saudi writer, said that while change in Saudi Arabia is inevitable, she believes that it will come later. “I thought the next two generations would still be affected by the religious extremism in the country. “Today, there is no space for pointless argument,” she said. “The age of extremism has gone and the extremists are back to their homes, scared of the new changes that life has imposed on them.” Al-Mogren added that the crown prince’s “determination to empower women has helped make a new reality for women in Saudi Arabia.” She further described the new reforms as a gain for Saudi Arabia, as the country seeks to create “a more organized civil life on the basis of responsibility and partnership between the two genders. Saudi Arabia is achieving justice, while respecting the different roles in its society.”

“I am pleased to confirm that Saudi Arabia will introduce amendments to labor laws and civil codes aimed at raising the status of Saudi women within our society,” Bandar tweeted. “These new regulations are an industry of history because they call for the equal participation of women and men in our society, a holistic approach to gender equality that will undoubtedly create a real change for Saudi women.”

While there is a long way to go, many agree that even baby steps toward granting equal rights to Saudi women represent a positive shift in the kingdom.

Last year, in an initiative geared toward enhancing the privacy of Saudi women during police investigations, Saudi Arabia’s Bureau of Public Prosecution announced that it intends to employ female detectives and administrative staff at its headquarters and various branches.

The new amendments extend to the home and workplace, where women will now receive standard employment discrimination protections. They also have the right to register the births of their children, live apart from their husbands, and obtain family records. In addition, a woman can register as a co-head of household, along with her husband.