IDF forces on manhunt after killers of Dvir Sorek 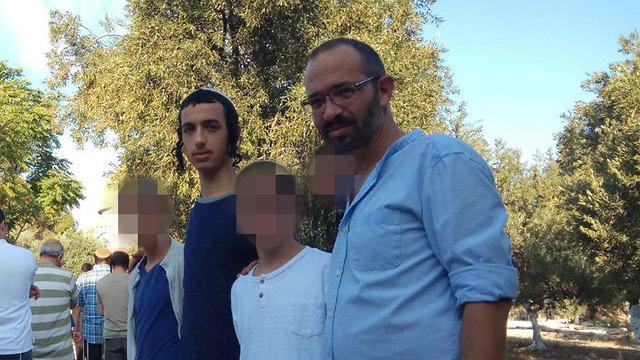 Netanyahu: We will capture the despicable terrorist and hold him to account

Prime Minister Benjamin Netanyahu vowed Thursday that Israel would find the murderers of Dvir Sorek, the 19-year-old soldier whose body was found slain in a terror attack in the West Bank earlier in the day.

Sorek, a resident of the settlement of Ofra, disappeared Wednesday evening while out buying gifts for his teachers. He was found stabbed to death early Thursday morning close the yeshiva where he was studying as part of a program combining military service and Torah study.

Dvir Sorek and his family
Israel's security forces were "in pursuit now in order to capture the despicable terrorist and bring him to account," Netanyahu said. Troops were carrying out a massive manhunt to track down thiose behind the killing.

Hours later, the prime minister attended a previously scheduled ceremony in the West Bank settlement of Beit El, where he laid a cornerstone for the construction of 650 new housing units.

He said Jews would not be driven from the area by Palestinians and "we will deepen our roots in our homeland."

IDF troops near the site of Dvir Sorek's murder (Photo: Amit Shabi)
President Reuven Rivlin offered his condolences to the family of the slain soldier. "Our prayers this morning are with the family of the murdered soldier and our hearts grieve for the life cut short," Rivlin said. "We fight terrorism without compromise to ensure the security of our people." Blue and White leader and former IDF chief Benny Gantz also sent his condolences to the family, adding he was certain the IDF and the security forces would get their hands on "these contemptible killers, dead or alive." Yair Lapid, Gantz's co-leader of Blue and White called the murder shocking and painful, and extended his condolences as well to the family and friends of Dvir Sorek. He too expressed confidence that the security forces would find the murderers and bring them to justice. Sorek was a student of the Mahanayim hesder yeshiva in the settlement of Migdal Oz, which provides a joint track of religious studies and military service. He had just enlisted the army but had yet to serve.

Kibbutz Migdal Oz in the West Bank
Rabbi Shlomo Vilk, head of the yeshiva where Sorek studied, told Ynet that the teen had been out buying gifts for his teachers when he disappeared Wednesday evening. "He was found with the books that he had bought for his rabbis," Vilk said. "He chose not to buy religious books, but the most recent novel by David Grossman, which he was clutching when he was discovered. One of our challenges is to be careful not to translate this murder into feelings of hatred, fear and isolation. We cannot let them drag us down and become like our enemy."

Knesset Speaker Yuli Edelstein also sent his condolences to the Sorek family at what he said was a time of incredible pain, and called for Israel to install its rule of law over the West Bank.

"Our answer to this abominable attack must be decisive," Edelstein said. "We must apply Israeli sovereignty over all settlements in the West Bank starting with the Gush Etzion bloc" where the murder took place.

Avigdor Liberman, the head of Yisrael Beytenu party and a former defense minister, blamed the Netanyahu government for creating the conditions that led to the attack.

"Their capitulation to Hamas in Gaza is leading to terror attacks in Jerusalem and the West Bank," Liberman said.

He also said the security forces were aware of many Hamas directed attempts to launch attacks.

Yair Golan, a former IDF general and a Democratic Union party candidate in the elections next month, told Kan television that the settlements near where Sorek was found "should have been encircled ages ago with a security fence that would help to separate between the Jewish population and the Palestinian population."

Education Minister Rafi Peretz ofof the far-right United Right Party said Israel must send a message to the perpetrators of this heinous crime is that Jewish blood was not cheap. He too expressed confidence in the ability of the security forces to find those responsible.