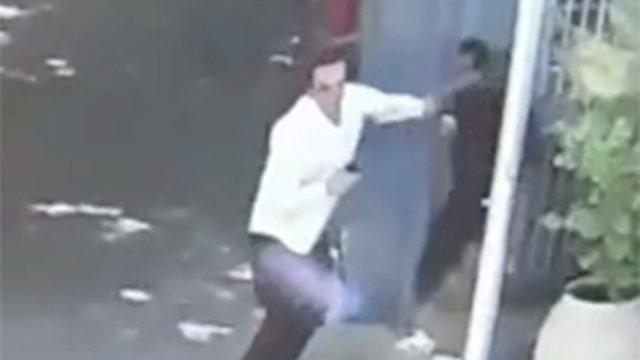 35-year-old Hebron man is arrested after he is subdued by security guards at Israeli-operated Allenby Terminal; footage of the incident appears to show victim with his back to approaching attacker

A Palestinian man was arrested Wednesday after trying to strangle an employee at the Israeli-operated Allenby Terminal crossing between the West Bank and Jordan.   The Israel Airports Authority, which operates the crossing, said that the 35-year-old Palestinian from the West Bank city of Hebron attacked a nearby worker and tried to stangle him with a rope.

An Allenby Terminal worker fights off his Palestinian attacker
The attacker was subdued by IAA security guards at the site and handed over to the security forces.

The attack was recorded by security cameras at the crossing.

The Palestinian entered the terminal and then began to run towards one of its employees, whom he then tried to choke him.

Witnesses at the scene say there was no interaction between the two before the attack.

The border crossing between the West Bank and Jordan (Photo: COGAT)

Footage of the incident shows the worker apparently talking on the phone outside the building with his back turned when the Palestinian suddenly charges towards him from behind and tries to strangle him.

The worker fought back against the Palestinian until he was overpowered by security guards.

The employee appears to have managed to free himself and cry for help.

Footage of the incident showing the Palestinian, right, and his victim, left

The attempted attack comes less than a week after 18-year-old Nahum Nevis was badly wounded and his 20-year-old sister Noam was moderately hurt in a car-ramming attack at a bus stop close to their home in the West Bank settlement of Elazar.