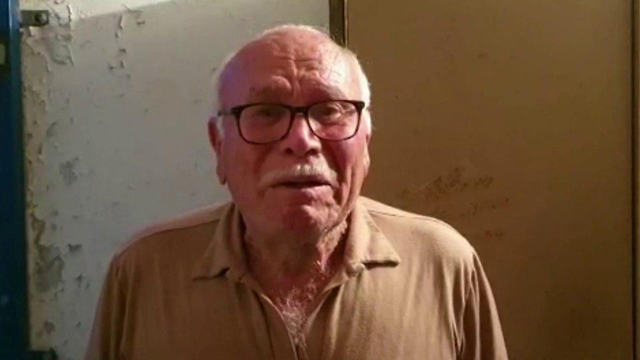 80-year-old uploads tear-filed video to Facebook asking Netanyahu and Deri let his houseguests, currently being jailed before expulsion, remain; 'I can't live without her,' he says, 'I suffered at the hands of the Nazis, I have seen enough of these fences'

An octogenarian Holocaust survivor has made a tearful online appeal to Israeli politicians to halt the deportation of the Nepalese foreign worker and her two young children who live with him.

Shalom Janach uploaded a video to Facebook addressing Prime Minister Benjamin Netanyahu and Interior Minister Aryeh Deri and imploring them not to deport Ishora Uprita and her children, 9-year-old Michael and 5-year-old Shira.

The three were arrested last week by immigration and are being held at Givon Prison in Ramla.

According to the Israeli media, Uprita and her children was supposed to be deported to India via Nepal on Friday. But the deportation was blocked by a Tel Aviv tribunal until at least Sunday.

Although the two children have Indian citizenship through their father, who was largely absent and is still in Israel, their mother would be unable to remain in India as she is from Nepal.

"I can't live without her," Janach told Ynet, saying that he met Uprita and her children through his charity work.

"I hand out fruit and vegetables every day and one of the family members would come and take some like everybody else," said Janach. "I told them to come every day because they had nothing to eat. So, I started feeding them and help take care of the children.

"I turned to welfare services, and they helped me with everything. They helped me put the kids in summer camp for free and paid for their education," he said.

"I started taking care of them every day until I got a doctor's and psychiatrist's opinion saying that I couldn't live without her. She cleans for me, takes care of me and does everything for me. I don't understand why they're doing this."

"He should go himself and see how the kids suffer," he said. "They're wetting themselves. I think that even our worst enemies shouldn't live in conditions like this.

"A thing like this cannot happen in a democratic country. I fought in four wars for this country and suffered by the hands of the Nazis. I have seen enough of these fences in my life and, it makes me want to cry."

When confronted with the worker's status in Israel, Janach denied he knew Uprita was staying in the country illegally.

"I didn't know she was staying in Israel illegally. I don't get involved in politics and stuff like that. I didn't inquire her about this, and she didn't tell me anything about it."

The arrest of the Nepalese foreign worker and her children came as a part of a large-scale operation to deport around 100 foreign workers and their children born and raised in Israel.

In 2010, Israeli authorities decided to let Israeli-born children above the age of five and their families to stay in the country, even if their parents were employed illegally at the time.

Children facing deportation were under the age of five in 2010, but some of them are 13 years old and older today.

There is speculation that many parents are in hiding, and are not sending their children to school for fear of being detained, despite an order by the head of the the Population and Immigration Authority not to arrest children on their way to or from school or while they are at school.