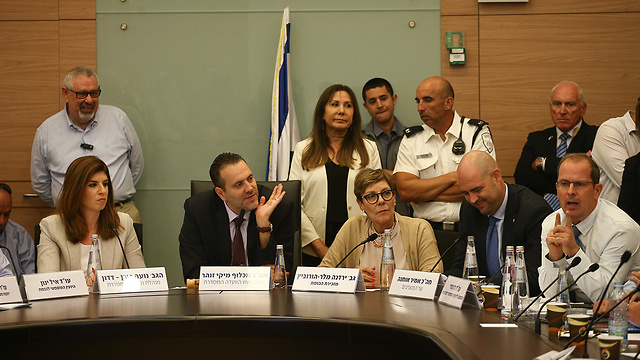 The contentious bill, meant to place video cameras in voting stations Israel's election next week, falters in committee and will not go for vote in Knesset plenum; bill was heavily criticized for discriminating against Arab voters

A controversial bill to place cameras in polling stations on Election Day next week will not be presented to lawmakers for voting after it failed to secure approval from the Knesset Arrangements Committee.

The contentious bill has been heavily promoted by Prime Minister Benjamin Netanyahu, who made voter fraud a key election issue ahead of the September 17 ballot, and had been approved by the cabinet on Sunday. The bill’s opponents said it meant to intimidate Arab voters.

The Regulatory Committee votes on the bill (Photo: Ohad Zwigenberg)

The vote reached a stalemate in committee after member Kulanu MK Roy Folkman failed to attend, and will therefore not be presented for a vote in the Knesset plenum. Twelve MKs on the committee voted in favor of the bill with 12 others opposing it.

The Arrangements Committee had been persuaded to fast-track the legislation, reducing the normal 45-day period between when a bill is approved by the cabinet to its presentation for a first reading in the Knesset.

The head of the Joint Arab List, MK Ahmed Tibi, slammed Netanyahu and the ruling Likud party at the onset of the debate.

"The prime minister said that the Arabs are flocking to the polls and today he’s translated it into an anti-Semitic statement, claiming the Arabs are involved in election fraud,” he said.

“This is a person who is suspected of fraud and bribery, (Likud) is the last party that can preach morality to us."

Justice Minister Amir Ohana from Likud said everyone should support the legislation seeing as “the camera doesn’t discriminate.”

“At the polling stations everyone is equal and the camera does not know how to distinguish between one type of fraud or the other, it just records what happens,” Ohana said. “Anyone who votes against the bill has either committed fraud himself or was the beneficiary of it.”

The proposed bill was opposed by the head of the Central Elections Commission that oversees the vote, who said the last-minute introduction of cameras might "lead to chaos".

Attorney General Avichai Mandelblit, who advises the cabinet on legal issues, also came out against the legislation, saying it could violate laws ensuring voters' privacy.