Surveillance footage from the scene of the accident 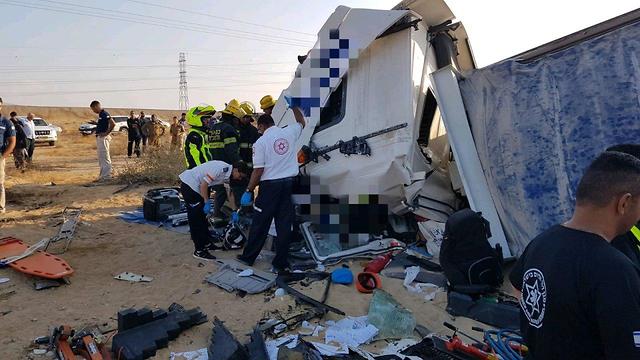 Surveillance footage shows driver of one of the vehicles veering into the opposite lane as the other tries and fails to swerve clear, leaving the two massive trucks to crash head on at the side of the road

The spate of deadly traffic accidents on Israeli roads doesn’t seem to be easing up, with another collision of two trucks Friday in southern Israel leaving one driver dead.

The head-on collision occurred on Route 25 near the city of Dimona early Friday morning. The two drivers were seriously wounded and taken to Soroka Medical Center in Beer Sheva. One of the drivers succumbed to his injuries two days later.

Surveillance footage of the truck collision

Surveillance footage from the scene of the accident shows that one of the drivers swerved on the narrow road into the opposite lane. The other driver tried to swerve clear of the errant vehicle, but the two trucks still collided on the side of the road.

MDA emergency teams at the scene of the accident (Photo: MDA)

"This is a very serious head-on collision,” said Daniel Blank and Orgad Cohen, the MDA paramedics who were the first to arrive at the scene of the accident. “Both drivers were trapped in the front seat of their trucks. We provided them with life-saving treatment while they were being rescued by the fire fighting teams.”

The National Road Safety Authority's data reveals that since January 2019, there have been at least 29 deadly road accidents involving trucks, which took the lives of 35 people.