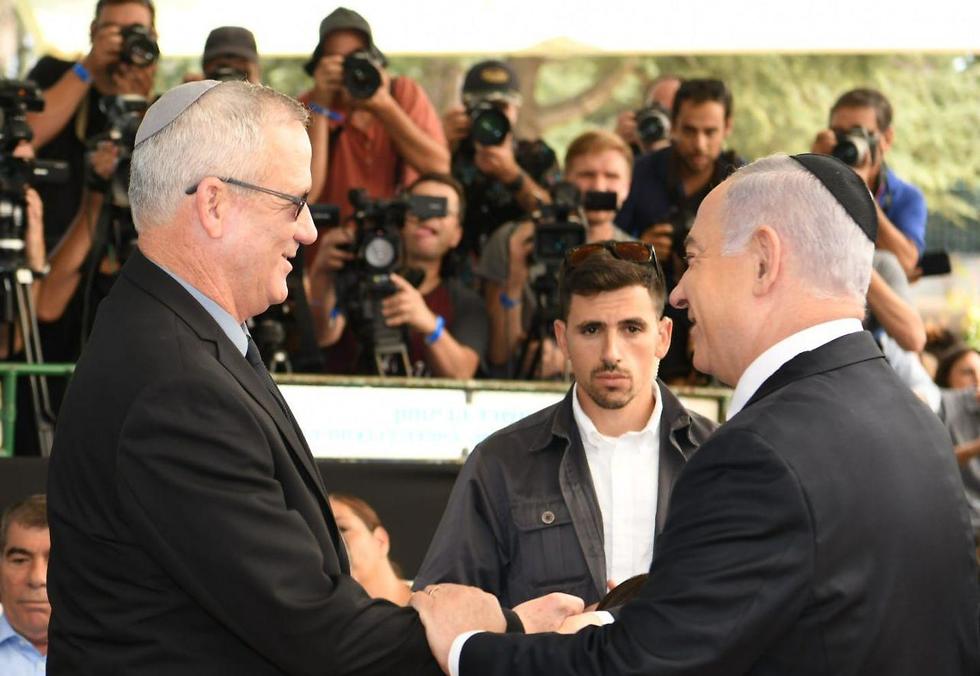 'Only Bibi' no more: Why does Netanyahu want to power-share?

After another failed attempt to muster enough seats to form a right-wing government, the prime minister is playing every card he's got, approaching chief rival Benny Gantz with a unity government plea

After failing to secure a clear election victory twice in six months, Israel's longest-serving prime minister now seems to be calculating that he can stay in power only by sharing it.

Following Tuesday's deadlocked Knesset elections, a weakened Netanyahu offered a national unity government on Thursday to his chief rival Benny Gantz - a former general who has emerged this year as a fresh face to take on Netanyahu.

Benjamin Netanyahu and Benny Gantz meet Thursday at a memorial service for Shimon Peres (Photo: Government Press Office)
But Gantz's party rebuffed the veteran leader who dominated Israeli politics, alone and virtually unchallenged, for the last decade. Gantz did not even mention Netanyahu by name and left it to his junior party leaders to echo his campaign pledge not to enter an alliance with the prime minister, who faces corruption allegations which he denies. Most people expected the experienced Netanyahu to cobble together a ruling coalition, so his failure to do so - twice - looks weak, in a country that puts a high premium on strength.

Is this the end of Netanyahu?

It may be too soon to proclaim the end of the Netanyahu era, but it does look like the beginning of the end. For a decade Netanyahu - who turns 70 in a month - dominated Israel's airwaves, news cycles and social media platforms and was the only Israeli prime minister that many world leaders had ever dealt with. But the man known to his adoring Likud Party supporters as "the magician" has wriggled out of tight spots before. He may yet conjure up a record fifth premiership, ensuring his political survival and allowing him to say he has a public mandate to fight off the criminal allegations.

Shimon Peres (left) and Yitzhak Shamir (right) (Photo: David Rubinger)
Shamir, who died in 2012, was a security hawk who entered his awkward coalition arrangement with Peres after his Likud predecessor, Menachem Begin, stepped down amid public division over Israel's 1982 invasion of Lebanon. The Shamir/Peres era saw Israel facing the outbreak of the first intifada, in 1987, and the continued building of new Israeli settlements in the West Bank.

With 96.5 percent of votes counted in Tuesday's election, Netanyahu's right-wing Likud has a provisional 31 seats in the 120-member parliament. That may change as more votes are tallied, but as things stand Likud is two seats behind Gantz's centrist Blue and White Party.

Why is taking so long to form a new government?

No single party has ever won an outright majority in the legislature, a reflection of the country's political, religious and ethnic divisions. That is not going to change in a year of unprecedented electoral instability which has already seen two elections - on April 9 and September 17.

Netanyahu leads a cluster of right-wing and ultra-Orthodox parties which currently stands at 55 seats. Gantz's center-left bloc has 57 seats, and doesn't want to sit with the religious parties. Neither has a clear path to power without relying on others.

Yisrael Beytenu Chairman Avigdor Liberman (Photo: EPA)
One wildcard is Avigdor Liberman, a far-right immigrant from the former Soviet Union who lives in a settlement in the West Bank. Liberman is fiercely secular and ultra-hawkish on issues relating to security and the Israeli-Palestinian conflict. His Yisrael Beytenu party is projected to have around eight seats. After the election he reiterated his support for a unity government, with Netanyahu and Gantz. He may be a kingmaker. He may end up being squeezed out. There are many possible outcomes.

What about Netanyahu's corruption allegations?

After a long-running police investigation, Attorney General Avichai Mandelblit has announced his intention to indict Netanyahu in three corruption cases.

He is expected to decide whether to lay formal charges by the end of 2019. But there is a pre-trial hearing in October, during which Netanyahu can argue against indictment. He denies wrongdoing and says he is the victim of a witch-hunt. Netanyahu's right-wing and religious allies had signalled support for granting Netanyahu parliamentary immunity. But that scenario is likely to cause a public outcry, and now appears remote. If Netanyahu does remain as prime minister - or a rotating one - the law says he does not have to step down even if he is formally charged. But if he is forced into a unity government with Gantz he could face far more political and public pressure to leave office. Some analysts have suggested a deal may be broached in which Netanyahu steps down from public office for good in return for reduced charges.

What happens after the final votes are in?

President Reuven Rivlin will consult with all party leaders about their preference for prime minister, and will then choose the one he thinks has the best chance of putting together a coalition.

Benny Gantz, Benjamin Netanyahu and Revuen Rivlin at Shimon Peres' memorial service (Photo: GPO)
The nominee, who does not necessarily have to be the head of the largest party, has up to 42 days to form a government. If he or she fails - as Netanyahu did following April's election - the president can ask another politician to try.

How long until a government is in place?

It could take weeks. Past coalition negotiations have often dragged on until the very last minute. Whoever is asked to form the next government will have to accommodate numerous parties. It could prove quicker if Netanyahu and Gantz choose to join forces, with or without the help of Liberman.

WHAT ABOUT TRUMP'S PEACE PLAN?

Netanyahu has said he expects U.S. President Donald Trump to release his long-delayed plan for Israeli-Palestinian peace soon after the election. But Trump may want to wait and see what government is formed before unveiling the plan. Netanyahu would certainly have a hard time getting far-right allies to sign on to any peace plan involving concessions to the Palestinians. Netanyahu had announced his intention to annex the Jordan Valley in the West Bank, where the Palestinians seek statehood. But without a clear majority of right-wing backers such a move appears unlikely. A cabinet with Gantz in it would likely be more open to negotiations with the Palestinians.