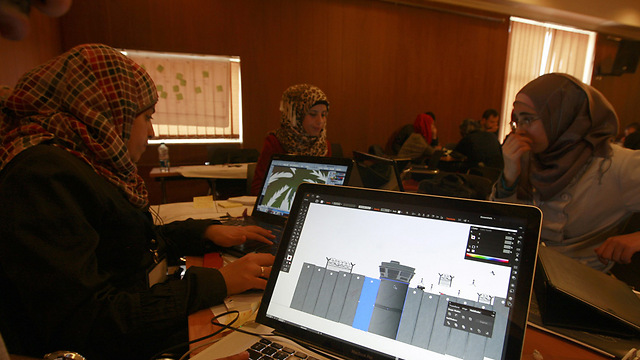 Empowering the Entrepreneurial Ecosystem in the West Bank

The main obstacle faced by Palestinian entrepreneurs was the lack of networking opportunities and that through this 3E conference, international companies and Palestinians gained access to one another

Entrepreneurship is not new to the Palestinian territories. However, business-people in the West Bank and Gaza face significant obstacles of limited resources and access to investors and markets abroad, in addition to assorted regulations and the cultural economics of the West Bank in general.

Emil Kort, 25, a Palestinian who is the CEO of CaseX, a technology startup that provides inexpensive design solutions for upgrading laptops, explained to The Media Line that the revenue and legal aspects of starting a business in the West Bank made things extremely difficult, because many large and leading technology companies worldwide “don’t recognize Palestine”.

Palestinian High-Tech workshop (photo: AP)
“Opening up a business here and having an address in Palestine limits your capability (as an entrepreneur) to open a bank account, receive payments, sell internationally,” he said. “For instance, setting up a payment system was a huge obstacle because PayPal doesn’t accept payments from Palestinian bank accounts”.

Some internet domain registrars don’t accept addresses based in the West Bank.

“Just because our startups come from here, doesn’t mean they are not high quality,” Kort said.

On Tuesday, in an effort to overcome such barriers, the Global Shapers Hubs in Palestine held the inaugural 3E International Conference on Entrepreneurship in Palestine, in the city of Bethlehem, to empower the entrepreneurial ecosystem in the Palestinian territories, and open new windows for its trailblazers.

The conference brought Palestinian entrepreneurs, startup companies, technology companies and other business entities together with more than 100 senior CEOs and experts from Germany and elsewhere in Europe.

Moreover, a senior delegation from the Geneva-based World Economic Forum attended the event.

Rateb Alami, the founding curator at Global Shapers East Jerusalem Hub and the conference manager, said that the gathering focused on networking.

“If opportunities between Palestinian startups and the international community are nurtured professionally, they can lead to investment,” he said.

Following the conference, Alami explained that the Global Shapers Hubs were working with the entrepreneurs to prepare their startup pitch presentations and follow up with the international delegates, as well as on knowledge exchange between Palestinian startups and like-minded European companies, to provide internships for new graduates.

"We want to document the results, “so that next year’s conference communicates success stories from Palestine,” Alami added.

Church of the Nativity and Manger Square in Bethlehem (Photo: Shutterstock)

The 3E conference was organized in partnership with the Palestinian Ministry of Entrepreneurship and Empowerment, in cooperation with Hubert Burda Media in Germany and the Global Shapers Hubs.

The Global Shapers Hubs is a World Economic Forum-related community composed of 50 young members spread over four hubs: in East Jerusalem, the Gaza Strip, Ramallah and Nablus, where their primary goal is to induce change in their communities.

Usama Sadawi, the Palestinian Minister of Entrepreneurship and Empowerment, said that the importance of the event lay in its bringing together, in the West Bank, young entrepreneurs with foreign “stakeholders of entrepreneurship".

“Those companies that made it from Europe to the conference today are big investors and many of them are seeking outsourcing opportunities. We can provide them with whatever they need in Palestine,” Sadawi said.

He explained that the Palestinian entrepreneurship arena already existed, but that efforts had been scattered.

“Now we are going to integrate all efforts, where the Ministry of Entrepreneurship and Empowerment will act as the umbrella of the entrepreneurship cluster. We will build the cluster and combine efforts”.

Sadawi said that the main obstacle faced by Palestinian entrepreneurs was the lack of networking opportunities and that through this conference international companies and Palestinians gained access to one another. “They have the brains, they have the knowledge and experience, but they need networking,” he said.

Mohammad Shtayyeh, the Palestinian prime minister, stressed during the conference that the Palestinian Authority would provide the infrastructure that was needed for creativity and excellence to thrive, and that incentives for investment already existed.

“Today in this conference, there are more than 700 participants, coming from (many) countries, mainly Europe,” Shtayyeh said.

He noted that for each 1,000 Palestinians, there are 220 university graduates, which highlighted the PA's status in the world regarding the proportion of graduates relative to the population. “The government will work to mark Palestine as an incubator for creativity,” he concluded.

Sami Abu Heiba, 31, a Palestinian who is the CEO of an Arabic learning application for travelers called GIL, said that the conference enabled him for the first time to meet different investors, and to exhibit his startup’s work worldwide. “I think it’s a great opportunity for us, especially because we just launched our website and are looking for non-Arabic-speaking investors,” he said.

Abu Heiba pointed out, however, that there was no seed-funding available for startups like GIL, which was important in order to move to the next stage.

Alla’ Barghouthi, 23, a sound engineer at GIL, said that the event encouraged Palestinian youth and startups to push forward and succeed.