Likud is now leading a technical bloc of 55 of the 120 Knesset members made up of the far right and ultra-Orthodox partners in the outgoing coalition, with the final tally showing they now have 32 with United Torah Judaism down to seven seats

President Reuven Rivlin is considering tasking Prime Minister Benjamin Netanyahu with forming a coalition government as soon as this evening regardless of development in negotiations between the two major parties.

In a meeting scheduled for Thursday evening at the President's Residence, Netanyahu and Blue and White leader Benny Gantz will brief the president on the progression of negotiations for the formation of a unity government. 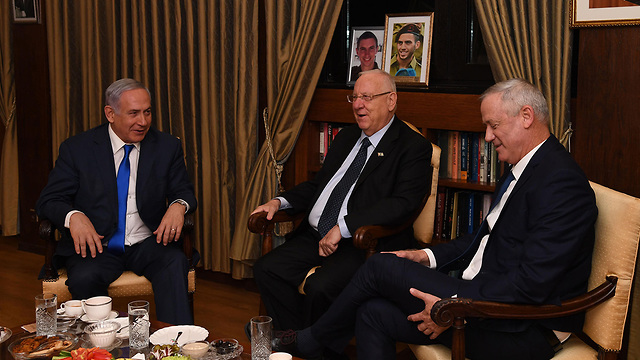 Since core issues remain unresolved including who should lead the government and what the make up of coalition members will be, the president is likely to grant the current prime minister the mandate to be first to attempt forming a government.

Netanyahu will have 28 days to build a coalition and if is unsuccessful may ask for additional time. It is the president's prerogative to grant an extension or not.

Rivlin's decision may be motivated by a desire to pressure both sides to increase their efforts at finding common ground.

Likud is now leading a technical bloc of 55 Knesset members made up of the far right and ultra-Orthodox partners in the outgoing coalition.

The additional seat for Likud came from the United Torah Judaism Party which has dropped from eight to seven seats.

There had been speculations among politicians on the left that a center-left government under the leadership of Gantz is possible if the ultra-Orthodox parties, defect from Netanyahu's bloc.

That option, unlikely as it was considered, is now impossible.

The official results of the Elections are to be made public on Wednesday.

Suspicion of election fraud was found in six instances and at after and the Central Election Committee had decided that their ballots will not be counted.