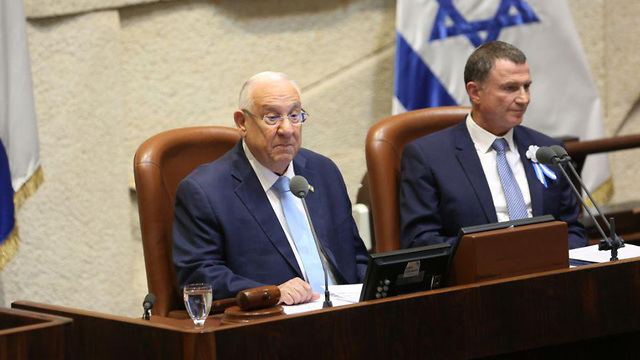 President Reuven Rivlin called in his Thursday speech at the inauguration ceremony of the 22nd Knesset for the establishment of a unity government that will lead Israel through the challenges it faces.

"Forming a government is not only the wish of the people. More than ever, in times like these, it is an economic and security need the likes of which we have not known for many years".

My friends and teachers, fellow Israeli citizens, along with the frustration at the political deadlock we are in, the election results are also a badge of honor for Israeli society. They are a red card from Israeli citizens to their elected officials. A red card for populism, for a political system that feeds on picking away at the differences between us and that sees all our fears, each of the other, as something to exploit".

"You, elected officials and leaders of the people, face an opportunity and a chance to form a broad government. One that will allow us to put the disagreements between us to one side and to work on finding areas of agreement. To work for the people of Israel, its economy, its security and in so doing, to give us all an opportunity to breathe a little, to heal".

Rivlin then went on to numerate some of the issues that the newly sworn lawmakers will have to tackle.

"Making day-care cheaper. Dealing effectively with Hamas, Hezbollah and Iran. Increasing economic productivity. Caring for the elderly and the disabled. Raising the standard of education. Creating real equality of opportunity for those in social and geographical peripheries. Tackling crime and violence that are overtaking Arab society and have become a national emergency".

"A broad government of this kind would be an opportunity for us all to remember that while there may be real areas of disagreement between us, there is also a wide range of challenges that we can all agree to tackle".