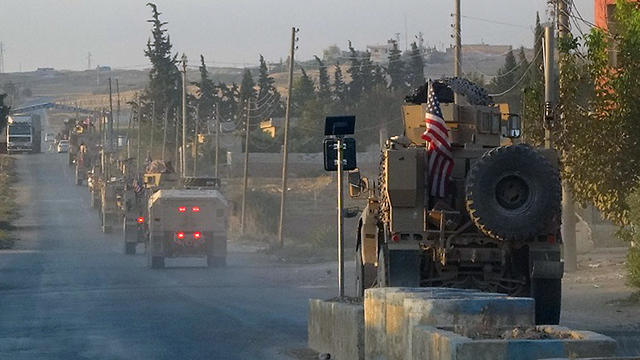 U.S.-backed Kurdish-led forces said American troops began pulling back Monday from positions along the border in northeast Syria ahead of an expected Turkish invasion that the Syrian Kurds say will overturn five years of achievements in the battle against the Islamic State group.

The Syrian Kurdish fighters also accused Washington of failing to abide by its commitments to its key allies in the fight against IS. It's a major shift in U.S. policy.

U.S. military vehicles travel down a main road in northeast Syria, Monday, Oct. 7, 2019
There was no immediate confirmation from the White House of U.S. troops clearing positions in areas in northern Syria. Turkish President Recep Tayyip Erdogan, however, also said American troops have started withdrawing from positions, and a video posted by a Kurdish news agency showed a convoy of American armored vehicles apparently heading away from the border area of Tal Abyad. Erdogan spoke hours after the White House said U.S. forces in northeastern Syria will move aside and clear the way for an expected Turkish assault - essentially abandoning Kurdish fighters who fought alongside American forces in the yearslong battle to defeat the Islamic State group. Erdogan didn't elaborate on the planned Turkish incursion but said Turkey was determined to halt what it perceives as threats from the Syrian Kurdish fighters.

A Turkish military vehicle drives on a joint patrol with US troops in the Syrian village of al-Hashisha on the outskirts of Tal Abyad town on the border with Turkey
Erdogan has threatened for months to launch the military operation across the border. He views the Syria Kurdish forces as a threat to his country as Ankara has struggled with a Kurdish insurgency within Turkey. In the U.S., Republicans and Democrats have warned that allowing the Turkish attack could lead to a massacre of the Kurds and send a troubling message to American allies across the globe. The Syrian Democratic Forces, as the Kurdish-led force is known, said the American pullout began first from areas along the Syria-Turkey border. "The American forces did not abide by their commitments and withdrew their forces along the border with Turkey," the SDF said in its statement. "Turkey now is preparing to invade northern and eastern parts of Syria." "The Turkish military operation in northern and eastern Syria will have a huge negative effect on our war against" IS, it added. In an agreement between Ankara and Washington, joint patrols had been patrolling a security zone that covers over 125 kilometers (78 miles) along the border between the towns of Tal Abyad and Ras al-Ayn. The SDF had removed fortification from the areas, considered by Turkey as a threat, and retreated heavy weapons. Meanwhile, U.S. and Turkish began joint aerial and ground patrols of the area.

President Donald Trump, left, talks with Turkey's President Recep Tayyip Erdogan
But Turkey and the U.S. disagreed over the depth of the zone, with Ankara seeking to also have its troops monitor a stretch of territory between 30 and 40 kilometers deep (19 to 25 miles). Despite the agreement, Erdogan had continued to threaten an attack.

Some analysts speculated that U.S. decision to withdraw its troops from the war-torn country would result not only in the genocide of the Kurdish population in the region by Erdogan's proxies, but also in the Russian and Iranian takeover of the Middle East.

The Kurdish-led fighters have been the main U.S.-backed force in Syria in the fight against IS and in March, the group captured the last sliver of land held by the extremists, marking the end of the so-called caliphate that was declared by IS's leader Abu Bakr al-Baghdadi in 2014. "We will not hesitate for a moment in defending our people" against Turkish troops, the Syrian Kurdish force said, adding that it has lost 11,000 fighters in the war against IS in Syria. A Turkish attack would lead to a resurgence of IS, it said. IS sleeper cells are already plotting to break free some 12,000 militants detained by Syrian Kurdish fighters in northeastern Syria in a "threat to local & international security." The Kurdish fighters also control the al-Hol camp, home to more than 70,000 including at least 9,000 foreigners, mostly wives and children of IS fighters. Turkish Foreign Minister Mevlut Cavusoglu tweeted that since the beginning of the crisis in Syria, "we have supported the territorial integrity of this country, and we will continue to support it." He added that Ankara is determined to ensure the survival and security of Turkey "by clearing the region from terrorists. We will contribute to peace, peace and stability in Syria." The Syrian Kurdish Hawar news agency and the Britain-based Syrian Observatory for Human Rights also say American troops were evacuating positions near the towns of Ras al-Ayn and Tal Abyad on Monday.