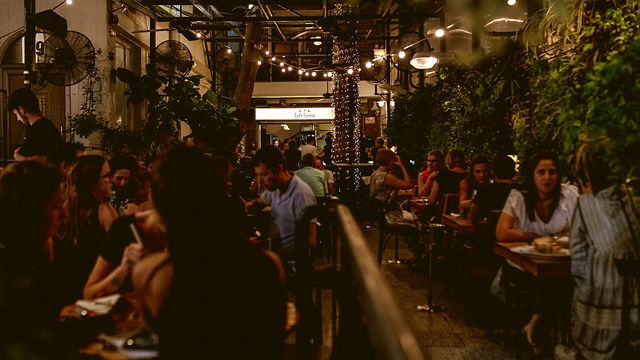 Cafe Europa, a popular eatery in the heart of Rothschild Boulevard’s trendy restaurant district, offers two separate menus: discounted tapas and drinks in the early evening, and a dinner menu different from most others in town thereafter

With decorative lights strung over the spacious courtyard that leads from upscale Rothschild Boulevard to an interior bar (actually two, as there is an additional bar on an upper floor), it always looks like a party is going on at Cafe Europa. And judging from the full house that is usually at the restaurant, there might as well be. Not to mention that the good food is also cause for celebration.

But one does not come to Cafe Europa to start right away with the food. Its cocktail menu, featuring no fewer than 11 specialty cocktails, is among the more creative in the city. Our waiter wasted no time in recommending the one that appeared first on the list: the Celery. And this delicious blend of gin, lemon, ginger beer and homemade celery syrup is indeed worthy of being placed at the top of the list.

Our second cocktail, The Fruit Lime, was very different: with two different liqueurs -- Amaro Montenegro and Chambord, mixed with ginger ale and lime -- it packed more of a punch, with a complexity of flavor that alternated between bitter and tart.

Aside from the cocktails, there is an extensive alcohol menu, and an adequate selection of imported beers and international wines, almost half of which are available by the glass.

As we sipped our drinks, the waiter explained the dinner menu, which is formatted very differently from what is found in most restaurants. Instead of the usual categories, like Starters, Main Courses, etc., there are seven groupings itemized by price, starting from NIS 29 and increasing in increments of NIS 10, culminating with dishes priced at NIS 89. All dishes are meant to be shared; some are specified by weight.

Two dishes are listed separately from all the others, and our waiter suggested we start with both: the house focaccia, served with a mild tomato salsa, and the Fish Crudo, sashimi-like slices of raw fish served on a bed of crushed ice, and accompanied by a slightly piquant dipping sauce.

Diners select two kinds of fish from a list of three recited by the waiter; we chose tuna and yellowtail, both exceedingly fresh, and nicely enhanced by the liquidy sauce.

The menu contains several vegetarian options, but very few vegan ones. Fish and seafood continue to be prominent throughout.

It is not possible to sample dishes from each price category, but it is certainly tempting to try.

We started with the asparagus on a bed of cauliflower cream, topped with a medium-boiled egg and seasoned with black tobiko.

Asparagus on a bed of cauliflower cream

The asparagus was cooked just right, al dente, while the cauliflower cream, helped along by the gentle saltiness of the tiny fish eggs, was more flavorful than one might expect from the bland white vegetable.

Next was the shrimp and calamari with garlic, parsley, hot peppers and citrus peels.

Once again, the freshness of the seafood was evident, while the savory sauce had us requesting an extra helping of bread so we could mop up every last drop.

(Full disclosure: our clairvoyant waiter had actually suggested the additional bread, anticipating the need and desire.)

Our attentive waiter surprised use again, when he brought a dish we had not ordered: gnocchi and vegetables in a pungent sauce of fish stock and sundried tomatoes.

Gnocchi and vegetables in fish and sundried tomato sauce

The plump light pillows of potato pasta were the perfect medium for absorbing the terrific sauce.

Our equivalent of a main course, from the most expensive part of the menu, was the Jaffa lamb ribs on a stew of black-eyed peas, spinach and sundried tomatoes.

Jaffa lamb ribs with a stew of black-eyed peas, spinach and sundried tomatoes

The ribs were a juicy medium with a pink interior, while the stew was hearty and satisfying.

There are only four desserts, listed on a separate menu. Since our waiter had steered us right all evening, we asked for his final recommendation, and it was for the Vanilla Brulée, a semifreddo crême brulée served with sliced fresh apple, pistachio ice cream and pistachio crumble.

It was a light, sweet and refreshing finale to a lovely evening.

For a somewhat different -- and less expensive -- experience, and one that was thoroughly enjoyed by a colleague, you can come to the restaurant’s Aperitivo, or Happy Hour (17.00-19.00), and order from the “early dinner” menu, which features deeply discounted cocktails, wine and beer, along with more than a dozen tapas-style dishes, attractively priced at NIS 10-15 each.