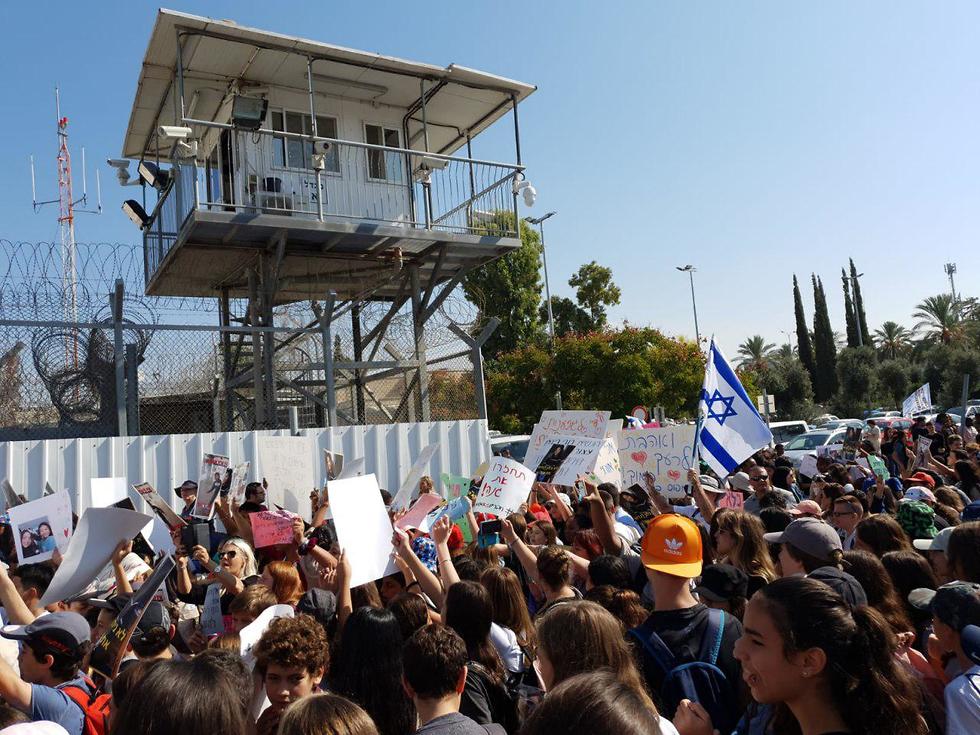 Hundreds of school children and their teachers protested Thursday outside a prison south of Tel Aviv where two children of migrant worker parents are being held before deportation to the Philippines.

Gena who is a middle school student and Ralf who is only in the 5th grade where both born and raised in Israel and are incarcerated with their mothers while deportation proceedings against them continue.

Students and teachers demonstrate against planned deportation of two of their friends to the Philippines (Photo: Yariv Katz)

Students and teachers demonstrate against planned deportation of two of their friends to the Philippines (Photo: Motti Kimchi))
The protesting school mates of the two demonstrated for hours calling on the minister of the interior to keep the children from harm and let them remain in Israel.

"There is no differentiating between blood. We are all humans" one sign said.

This was the largest demonstration to date outside the prison since the government began the current wave of deportations.

Herzliya Hebrew Highschool principle Zeev Dagani halted studies to allow student to participate and even provided buses to transport protesters to the prison.

The educator continued, "We appeal to the judicial system to bring about the release of the students and call on all warm-hearted citizens to come and join our protest because there is no more valuable lesson that could be taught".

The two kids were detained by police as they were heading for school despite an understanding that immigration authorities would not target children in this manner after instruction were passed down from the interior ministry and sparking more fear among the migrant workers community.

Students and teachers demonstrate against planned deportation of two of their friends to the Philippines (Photo: Yariv Katz)
Yaakov Ashkar and Alex Uri, who are students at Herzliya Hebrew Highschool said:

"We've come to demonstrate for Gena's release. She is one of us. Children of 10 and 12 years of age must not be deported", adding "Since we've heard that Gena was being held in prison, we've been so depressed".