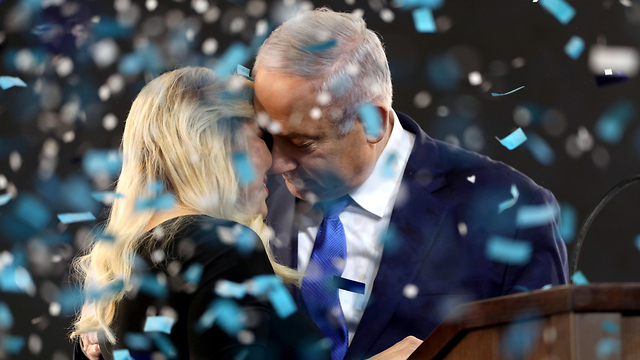 From Eurovision to riots and volcanos: EPA picks photos that define 2019

The European Pressphoto Agency has chosen a list of shots which in their opinion depict the year's most fascinating moments in all its glory; the list includes Israeli elections, protests in the West Bank and various snaps of President Trump

As this calendar year draws to a close The European Pressphoto Agency (EPA) have picked out a series of photographs which in their view define 2019 better than any others. Events in Israel also left their mark, with images of the Netanyahu couple embracing after the April 9 elections, musical performances during the Eurovision Song Contest in Tel Aviv as well as snaps from an ultra-Orthodox rally in Jerusalem.

Breathtaking views, iconic moments and events that became history - here are some of the images that made the fascinating list.

Prime Minister Benjamin Netanyahu and his wife Sara embrace after what seemed like a Netanyahu win in this year's first round of elections, April (Photo: EPA)

Eurovision Song Contest 2019 winner Duncan Laurence during his last rehearsal before the final in Tel Aviv, May (Photo: EPA)

Thousands of ultra-Orthodox rally in Jerusalem before Israel's second elections of the year, September (Photo: EPA)

Lebanese protestors take a selfie break during riots against the government in Beirut, October (Photo: EPA)

Hezbollah supporters listening to the terror group's leader Hassan Nasrallah giving a speech in honor of the 40th anniversary of the Islamic Revolution in Iran, February (Photo: EPA)

The coronation ceremony of the Emperor of Japan Naruhito, October (Photo: EPA)

Military parade at Beijing's Tiananmen Square to mark the 70th anniversary of the establishment of the People's Republic of China, October (Photo: EPA)

A protestor in a trump costume attacked by police during anti-government demonstrations in Hong Kong, September (Photo: EPA)

Protests against the government in Chile, October (Photo: EPA)

Photographers take pictures of a woman wounded in clashes between protesters and police in Zimbabwe, August (Photo: EPA)

Man in a Spiderman costume during a screening of the franchise's latest fillm in Nepal, July (Photo: EPA)

A policeman buying a water bottle from a woman through a barbed wire fence while he secures the Constitutional Court in Jakarta, Indonesia, July (Photo: EPA)

Dancers at the Asian Culture Carnival in Beijing, May (Photo: EPA)

Art in a field on the mountainous border between Switzerland and France, July (Photo: EPA)

A woman visits the exhibition 'Mirrors: In and Out of Reality' in Barcelona, Spain, April (Photo: EPA)

Bath as a snow sled in Switzerland, January (Photo: EPA)

A protestor taking a selfie during a demonstration against the government in Haiti, February (Photo: EPA)