The Israeli and World Press photography exhibition currently showing at the Eretz Israel Museum in Tel Aviv includes choice photographs in the "Religion and Faith" category this year as in previous years.

True to tradition, the Israeli part of the exhibition displays images from the ultra-Orthodox world in this category. The exhibition, held in cooperation with Ynet, is made up of two separate displays, the international World Press Photo exhibit, to which almost 100,000 photographs from around the globe were sent this year, and "Edut Mekomit" (local testimony), which each year gives a stage to Israeli and Palestinian press photographers.

The "Religion and Faith" category was first displayed in the Israeli part of the exhibition two years ago, and ever since has become an integral part of it. 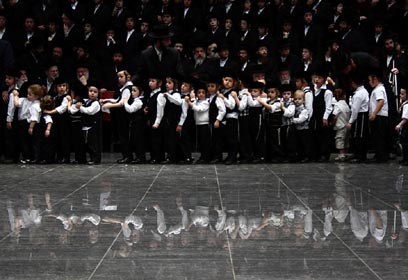 Some 8,000 photographs were submitted to the Edut Mekomit contest this year. Out of these, a panel of judges selected 250 photographs by 54 photographers, in 10 different categories: News, politics, community and society, religion and faith, lifestyle, arts and culture, nature and environment, sports, daily life, and portraits. The selection process is carried out anonymously, and only the photographic value of the images, as well as their cultural and creative value were considered. The display's curator, Dana Gillerman said: "The pages of the newspaper are the natural stage for press photos. That's where it is located, always accompanied by text that connects it, but also gives it interpretation. What happens to a photograph when it is distanced from the text? "All the photographs that came to the show were removed from their context. Some of them did not survive this independence. The better ones, those that include a visual story without having to lean on the written word, passed one phase, and then another." The exhibition will be on display until January 16 at the Eretz Israel Museum in Tel Aviv. Opening hours: Sunday, Monday, Wednesday from 10 am to 4 pm. Monday and Thursday from 10 am to 10 pm. Fridays from 10 am to 2 pm, and Saturday from 10 am to 2 pm, 6 pm to 10 pm.

פרסום ראשון: 01.03.10, 17:43
commentsend to friendshareshare
See all talkbacks Close all talkbacks
new comment
Next
Previous
Warning:
This will delete your current comment
cancelOk