New York photographer Caryl Englander, chairman of the board at the International Center of Photography, chose to celebrate the Global Day for Jewish Learning in an inventive way – by connecting her art to Steinsaltz's life work through the lens of her camera.

For over two years, Englander travelled the globe photographing people of all ages as they discover and study the wisdom of the Talmud with Rabbi Adin Steinsaltz's commentary. She visited yeshivas, schools, community centers and synagogues, creating a global mosaic of people studying the deepest levels of the Talmud.

Englander's photographs were showcased at a special exhibition at the General Assembly of the Jewish Federations of North America, which commenced on November 7 in New Orleans. That day also marked the Global Day of Jewish Learning, which is being held in honor of the completion of the Steinsaltz Talmud interpretation.

The idea to go out and take pictures of people studying the Talmud came from a conversation she had with Rabbi Steinsaltz. Her intent was to find out about the power and influence the Talmud has on those who have studied with the rabbi or from his books. 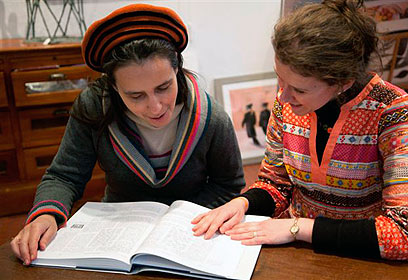 interpretation: His own students, scholarly women in New York, artists in Moscow, Jews in Siberia, rabbis, freelance professionals and more and more.

Englander sought to examine the connection and the change in people who have experienced the Talmud and other Jewish texts.

Ynet is also celebrating the Global Day for Jewish Learning: The Hebrew version of the site is holding a competition - Midrash Tmunah (interpretation of a picture).

Ynet readers have been asked to give a visual interpretation of one of four stories from the Talmud. Participants in the competition, which is being held with the cooperation of Rabbi Steinsaltz's Hashefa organization, could win valuable prizes.