Journey to the remnants of Sarajevo Jewry

Ten thousand Sarajevo Jews were killed in the Holocaust, and the once vibrant community never truly recovered. Join a group of students travelling to find their heritage

The city of Sarajevo spread itself at my feet in all its glorious beauty. There is no doubt that during the war between 1992 and 1995, the Serbian forces saw this exact view from the heights of the old Jewish cemetery and made use of the vantage point for artillery fire and sniper shooting against the city under siege below. The bullet holes and broken tombstones bare witness to the fact.

Special Connection
Ella finally feels at home
Yael Branovsky
From Russia to Ramla – through India: After traveling across India for more than a decade, Ella Elisha runs into group of hikers who help her discover her Jewish roots. Short visit to Israel prompts her to return, and after converting to Judaism and marrying an Israeli, she finally has a place she can call home
Ella finally feels at home

Lior counts and lists the tombstones, Anna, a Muslim architecture student from the University of Sarajevo who joined the project, draws a map of the cemetery. Noa takes pictures of the unique tombstones and their serial numbers, while Yael, Dvir and I go from tombstone to tombstone, copying everything that the living said of the dead.

The goal: Create an online photograph archive of the cemetery tombstones and make use of the knowledge to follow the trends and changes that occurred in Sarajevo's Jewish community. All part of the "Journey into Jewish Heritage" project.

The project, funded by the Zalman Shazar Center with help from the Avi Chai Foundation, connects Israeli students from a variety of backgrounds to their Jewish heritage and the Jewish communities in the Diaspora. The idea behind the project is documentation – and through documentation – preservation of the Jewish heritage of communities whose glory days are far behind them.

Each mission numbers 35 students who show interest in the subject and are paired with university students from the destination city. The recently returned mission from Sarajevo was the 13th in number, and was preceded by many successful missions to Jewish communities in India, Eastern Europe, turkey, Romania and the Balkans.

Our mission numbered 32 members and included, like many of the previous missions, architecture students who focus on documenting the buildings and reconstructing their utilization within the community, photography and Jewish art students who focus on visual documentation and additional students from various academic fields.

So close and yet so far

On Friday, while working at the cemetery, I noticed a young man loitering among the tombstones. I went up to him. Maybe I could help him. Maybe he could help me. His name is Sam, and American tourist. He's Jewish, searching for a bit of Yiddishkeit. Misses the Sabbath. We never met before but I feel like we've known each other for years. Do I?

That Sabbath Sam and his trip mates, Natalie and Andy joined the mission at the Jewish community's house in the city. The "Journey into Jewish Heritage" is first and foremost about our journey into ourselves, our identity, the 'me' that is in another dimension. Each and every member joined the mission because he or she was looking for something - something amorphous, undefined. Some would call it a divine spark or historical connection; some would call it the chain of generations. I found mine that Friday, surrounded by ancient tombstones, shaking hands with a total stranger and yet, someone close and familiar.

We didn't tour the city with cameras and lonely planet guides. We penetrated the depths, the roots of the city, from the tombstones to the stories. In a strange way, we never felt like tourists. We felt like invited guests, like distant relatives who became members of the household, greeted with a warm embrace.

We don't fool ourselves. Our discoveries won't change the face of history and most of them, if not all, can be found in existing literature and historiography. And yet, we can still say that we removed a film of dust off of the story of Sarajevo's Jewish community. The community was founded in the 16th century with the arrival of merchants from Thessaloniki who were among the Jews expelled during the Spanish inquisition. The community flourished under the tolerant, multi-cultural rule of the Ottoman Empire.

During the Second World War the Balkans' Jewish community was hit in a critical manner. In 1941 the Axis countries conquered Croatia and allowed the Croatian fascist party to carry out the minority extermination policy throughout the Balkans, with the full support of the Nazis, thus dooming all the Jews in the region. Some 80% of former Yugoslavia's Jews, including 10,000 Jews from Sarajevo, were murdered in the Holocaust. The vibrant Jewish community never recovered.

Alongside ancient mosques and grand cathedrals, we found four fascinating synagogues. One of them is the impressive great Sephardic synagogue, which was severely damaged during the Second world war and was eventually donated to the municipality due to lack of funds and the community's inability to stand the expenses of its refurbishment. The synagogue was transformed into a concert hall. The communists tried to hide and get rid of all Jewish symbols in the building but our team managed to get behind the scenes and document the synagogue's dome with its original ornamentation.

The other three synagogues are the old synagogue from 1581, which serves as the Jewish museum; The synagogue that serviced the city's poor and which fostered many charitable organizations, now an apartment building with only a few stars of david to mark its past use; and the Ashkenazi synagogue, built in 1902 with the arrival of Ashkenazi Jews after the area was conquered by the Austro-Hungarian empire in 1878. There we found the enormous ancient library, which two students documented and catalogued, revealing yet another layer to the literary world of Sarajevo's Jewish community, which included books that were printed many in languages ad brought to Sarajevo from around the world.

It seemed as if the dust we removed from the books and stories, from the buildings and the heritage, was carried on the wind into the souls of young and old and that our presence in the city created an echo among the city's Jewish residents and those of other religions. 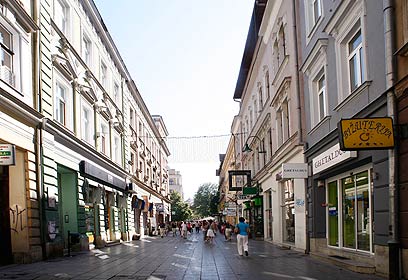 Truth be told, the Jewish community in Sarajevo is an assimilating one, whose active traditions could most likely be counted on one hand. But surprisingly (or not?), in spite of the lack of practical religion, the community carries with it a strong Jewish tradition which beats like a speeding pulse that will not allow the community to sink into oblivion.

Our frenetic activities in the city strengthened these feelings and swept through the community like a breath of fresh air. Young community members came out of hiding, old men sat themselves down in front of our cameras and the strong Bosnian coffee flowed like water as stories long since buried in the vaults of old men's memories were brought out and retold.

When we made the climb towards the ancient Jewish cemetery, with its 7,000 unequaled tombstones, we opened yet another gate into this magical community. Through the emotional poems and pictures of the deceased, we felt like we were being introduced to the present-absent community and to magnificent Jewish life that was and is no more.

It turns out that Jewish tradition has inert power, independent. It is like a spark. Sometimes you need to bend down, get your knees dirty, blow on the ember and feed the fire. That is how I felt as I kneeled in the cemetery holding a brush in one hand and a pen in the other. I didn't kneel in order to reveal yet another tomb of some scion to a great family. I revealed something greater, more expansive. I revealed a piece in the great Jewish tapestry- feeding the Jewish flame, even if it was just my individual flame.

I removed my yarmulke when I turned 18, and as for anything involving the Jewish religion, I had a bellyful of it. Yet when I was asked to lead Shabbat prayers in the Carlebachv style, I hardly hesitated. It was a soul shaking experience; Jewish, though not necessarily religious. For Sarajevo's Jewry as strange as this may sound, is not religious.

So, what makes it part of Judaism, I asked. Does the fact that someone is Jewish according to the halachic perspective make his Jewishness kosher when that is the sum of his religious belief? I found the answer to my question in a paraphrase of the famous saying of Don Abravanel: "More than the children of Israel kept the Sabbath, the Sabbath kept the children of Israel." There is no judgment in this saying, rather there is an objective distinction. The Sabbath, the Hanukkah candles, the Passover holiday, the synagogue, charitable organizations, Jewish literature - these are what kept the Jews safe in the spicy Balkan stew.

Indeed, during the civil war in former Yugoslavia, when the Bosnian Muslims, the Orthodox Christian Serbians and the Catholic Croatians battled against each other brutally, the Jews were, most likely for the first time in history, nearly 'protected citizens.'

The Jewish community building was used as a sanctuary to any who sought it, bread was distributed to the hungry, medicine to the sick or injured, whatever their religion. Jewish community representatives acted as mediators accepted by all sides and passing messages between the sides and taking part in the appeasement and reconstruction efforts that followed.

More than on a physical level, it was the Jewish elements that protected the community on the identity and social level. In Israel the number of scholars contemplating the idea of a non-halachic Judaism, whatever it is named, has grown in recent years. In Bosnia I met and fell in love with social Judaism: Judaism that respects the different, and allows anyone who chooses to do so to jump on the bandwagon. An empty wagon you say? To me it is full to overflowing, more than any other wagon I have seen.