Fed up with high rent, activists spend night on street. Organizer: I'll stay as long as it takes

Hundreds of people gathered at Tel Aviv's Habima Square on Thursday, pitching their tents for the night in protest against skyrockeing housing prices.

Housing Crisis
The rich are taking over
Shai Zamir
Op-ed: With skyrocketing housing prices, living in Tel Aviv has become an impossible dream
The rich are taking over
The protest originatedon Facebook, just like the recent cottage cheese boycott. By Thursday, about 4,500 said they would attend the demonstrations in Tel Aviv and Jerusalem. The event's organizer, Daphni Leef, and several other activists arrived at the Tel AViv square in the afternoon. One of the protesters brought furniture from home, putting together a living room on Rothschild Boulevard. "This is just the beginning, talk to me when the entire Rothschild Boulevard is full of tents," Leef told Ynet. She promised to stay the night, and longer, if necessary. "I will stay here as long as it takes for something to happen, even if I have to do it alone. 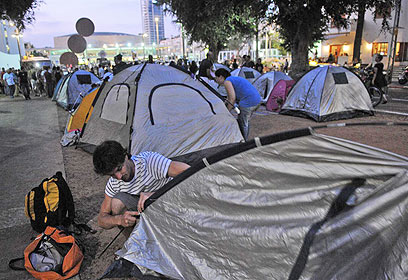 Pitching tents‏ (צילום: ירון ברנר)
1
2
3
4
5
6
7
"This kind of communication has disappeared from this country," she said. "This is the biggest thing to come out of this day, that people are coming together and listening to each other. It's your right to have something as basic as a roof over your head." The 25-year-old activist came up with the idea for the protest after she was notified she must vacate the apartment she has been renting at the center of Tel Aviv for the past three years, because the building is to be knocked down and replaced. When she started searching for a new place, she realized housing prices have risen higher than she could afford.

And so, Leef decided to set up camp at Habima Square. About a week ago she launched the Facebook event, inviting everyone to join her new home – on the street. The initiative gained traction and spread to Jerusalem. Leef and her supporters now hope the protest will sweep the rest of the public.

"Something exciting is happening here," Knesset Member Dov Khenin (Hadash), who arrived at the protest, told Ynet. "People are standing up and saying that the housing shortage has reached unbearable proportions, that they are being squeezed out of the city. "(…)The towers are not meant for these people," he said. "These boulevards, which once were occupied by students, are now affordable only for the rich. We must understand that this is not a turn of fate, but a product of social policy, of a warped list of priorities." Khenin blamed the current government and its predecessors for not addressing the housing crisis, but said that he has debated at the Knesset the idea of government-commissioned affordable housing that would be offered to young people and other population groups. The municipality threatened to prohibit the protest from taking place early on Thursday, but came through with the permit in the afternoon.

"The tent protest is justified and worthy," Tel Aviv Mayor Ron Huldai announced on his Facebook page. "The government of Israel is knowingly – as an ideology – leaving the social issues up to the forces of the market. There's no planning, no long-term vision, and the decisions are all improvised."

Meirav Crystal contributed to the report