The foursome, comprised of the United States, Russia, the European Union and the United Nations, released a statement saying they were alarmed by Israel's new settlement plans.

"The Quartet is greatly concerned by Israel's recent announcements to advance planning for new housing units in Ariel and east Jerusalem," the mediating group said in a joint statement.

"The Quartet reaffirms that unilateral action by either party cannot prejudge the outcome of negotiations and will not be recognized by the international community. Jerusalem in particular is one of the core issues that must be resolved through negotiations between the parties, which underscores the urgent need for the parties to resume serious and substantive talks.

"This comes at a critical juncture with Quartet efforts ongoing to resume negotiations which are the only way to a just and durable solution to the conflict," the statement added.

"The Quartet is determined to pursue its efforts. Ultimately, it is up to Israeli and Palestinian leaders to make tough decisions and avoid actions by their governments that undermine the very goals they and we are trying to achieve." 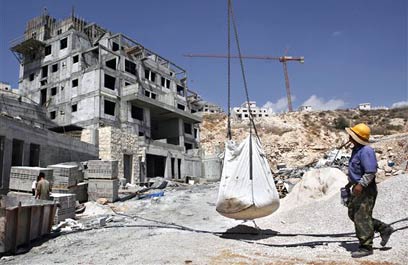 On Monday the Interior Ministry's Planning and Construction Committee approved the construction of 277 new housing units in Ariel, defying international criticism of continued construction on land the Palestinians claim for a state.

The planned construction in Ariel – the core of the settlement bloc farthest inside the West Bank – is the third project on disputed lands to be advanced in the past week: Israel has recently moved ahead on plans to build more than 2,500 new apartments in east Jerusalem, and Israeli officials say 2,700 more will be approved soon.

"We think unilateral actions by both sides, Israeli or Palestinian, are not helpful to the process to try to get both parties back to the table," US Embassy spokesman Kurt Hoyer said of the decision.

The US State Department also expressed concern over the construction decision: "The United States is deeply concerned by continuing Israeli actions with respect to housing construction in Jerusalem."

"We have raised this issue with the Israeli government and continue to make our position known. As we have said before, unilateral actions work against efforts to resume direct negotiations and contradict the logic of a reasonable and necessary agreement between the parties.

Condemnation from the Palestinian side was swift to follow with Chief Palestinian Negotiator Saeb Erekat slamming the decision as illegal, adding that in pursuing the project, Israel was making clear "its intention to turn this occupation into an effective annexation."

AP and News agencies contributed to this report