The investigation against singer Margalit Tzanani has led police to check the singer's bank account to see whether she received unusual amounts of money from talent manager Assaf Atedgi she is suspected of extortion , Ynet learned Thursday.

The singer is expected to be brought before investigators once again on Thursday, after spending her first night in Neve Tirza Prison, following the Rishon Lezion Magistrate's Court's ruling to extend her remand by six days.

Police officials said they hold a warrant permitting them to inspect Tzanani's account activities in the past year.

Following an initial examination, detectives contacted the Tax Authority informing them they might have attaining important information relating to the case. 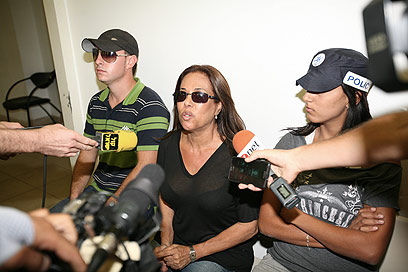 The singer in court on Wednesday (Photo: Bagel)

At this point in time Tzanani's accounts have not been seized, however during her investigation she will have to answer many questions about her sources of income. In the case that detectives discover shady money transactions from Atedgi to Tzanani, the singer might also get tangled up in money laundering allegations.

The allegations Tzanani faces may lead to an indictment and jail time, should she be convicted. Despite the fact that she is a well-known singer in Israel and a judge on the popular television show "A Star is Born" (the Israeli version of "American Idol") may be of little aid to her during the proceedings.

Under Israel's Penal Code, the maximum sencence for the allegations she faces is  seven years in prison. "It's considered a very grave offense," noted Professor Emanuel Gross, an expert on criminal law.

If the blackmailed party gives in to the demands of the extorter, it's considered extortion under aggravating circumstances and the maximum sentence is nine years in jail. As for the penalty for conspiracy to commit a crime, the perpetrator might be sentences to five years behind bars and three for intimidation charges. However in Tzanani's case, Gross explained that such offences "are interconnected," so if needed a combined sentence will be given. "Six years are a definite possibility, despite the fact that she has no criminal past," concluded Gross. "It's not just a case of extortion and intimidation, but it involves a criminal offender." Aviel Magnezi contributed to the report