Bus targeted in one of attacks
Photo: Reuters

'I was too scared to move'

Woman recalls moments of horror when terrorists ambushed her car: There was blood on the floor, I heard my husband gasping

A woman injured in one of Thursday's terror attacks recalled the moments of horror from her hospital bed, saying she pretended to be dead after terrorists fired at the car her husband was driving in order to escape being shot at again.

"I couldn't move because I was afraid that the terrorist would see and shoot us again. There was blood on the floor, and I heard my husband gasping. I saw that his shirt was soaked in blood. I was afraid to call to him," she said.

The couple was driving back from a vacation in Eilat when they were caught in a terrorist ambush.

"We saw cars stopping. We were told that Egyptian soldiers were shooting. After a few minutes a military jeep came , and the soldiers told us to continue driving. But we didn't understand them correctly. They told us to go back, but we continued straight ahead," she said. 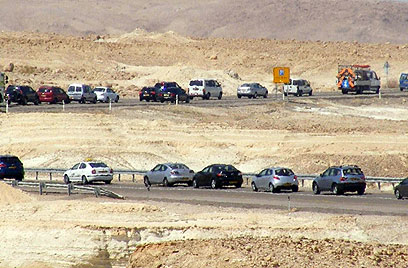 Moments later, they saw three figures behind them, one of whom began shooting at their car.

"In retrospect, there must have been an observer who warned him that we were coming," she said. "I screamed, bent over and shielded my face. It was an instinct."

'I called my son for help'

Her husband, who was driving, tried to avoid the bullets, but lost control of the steering wheel. The car flipped over.

"I prayed quietly that they would stop shooting at us," the woman recalled. "The radio was on… The songs continued to play while we heard a fire exchange between the IDF and the terrorists. It was close to us." They lay there for over an hour. At one point, the pressure of the seat belt became unbearable, and the woman reached for her bag and took out her cell phone. She called her son and asked him to call for help. Moments later, soldiers arrived and rescued them. The couple was taken to Eilat's Yoseftal Medical Center; later, the husband, who was critically injured, was airlifted to the Soroka Medical Center in Beersheba. Six Israeli civilians and an IDF soldier were injured in the multiple attacks that took place near Eilat early on Thursday afternoon. Another shooting incident occurred later, injuring an IDF combat soldier. According to a defense establishment source, terrorists opened fire at IDF troops searching the border with Egypt. At Soroka, the grandparents of one of the soldiers injured in the attacks said that "he is in the final stages of the surgery. His injuries are moderate to critical."