Tensions high in Gaza region: Hamas’ military wing, Izz al-Din al-Qassam Brigades, announced early Saturday that it is no longer committed to the Gaza region lull with Israel. Brigades’ spokesman Abu Obeida said in a statement: “There is no longer a lull vis-à-vis Israel, in the face of the ongoing massacre that it commits against the Palestinian people without any justification.”

The Hamas announcement follows a wave of Air Force strikes in Gaza that left 15 people dead since Thursday night, including senior terror leaders. The IDF also targeted several Hamas facilities across the Strip as part of Israel’s retaliation for Thursday deadly terror attacks.

Meanwhile, Palestinian medical sources said that an Air Force strike Friday on a vehicle carrying wanted terror suspects missed its target, instead killing three civilians – a doctor, his brother and a boy. 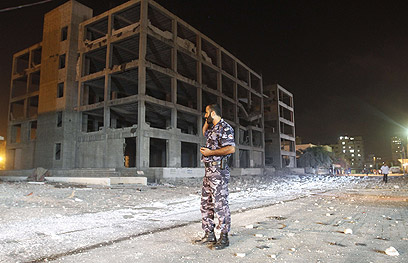 In recent months, following the last round of major fighting in the Strip in April, relative quiet prevailed in the Gaza region and in southern Israel. However, throughout the period terror groups in the Strip launched intermittent rocket attacks on Israel, often without Hamas’ approval.

Thus far, Hamas’ military wing was the only Gaza faction to refrain from firing at Israel, or at least avoid claiming responsibility for rocket and mortar attacks. However, a leaflet distributed by the group Friday read: “The blood of resistance commanders had not been spilled in vain. The continuation of Israel’s crimes will bring disaster upon it.” Group members said Hamas will not allow Israel to escalate its attacks and go unpunished.

However, while the group’s military wing issued harsh statements, Hamas’ political leadership appeared intent on allaying tensions in the region and bringing the latest round of fighting to an end.

Late Thursday, Hamas Prime Minister in Gaza, Ismail Haniyeh, spoke with UN and Egyptian officials, as well as with Arab League Secretary General Nabil al-Arabi, in an effort to end the escalation in and around the Strip. In their conversations, the Hamas leader and various officials discussed the latest developments in the region.