"Hamas is responsible; it's the master of the house," Aharonovitch said while touring the site of Saturday's deadly rocket attack in Beersheba. "The heavy responsibility lies with Hamas and it will pay a heavy price."

The forum of top eight government ministers was set to meet Saturday night to discuss escalating Israel's response to the rocket fire from Gaza. During the deliberations the ministers will discuss all options, including a ground operation in the Strip and increasing the pace of assassinations of terror group leaders. 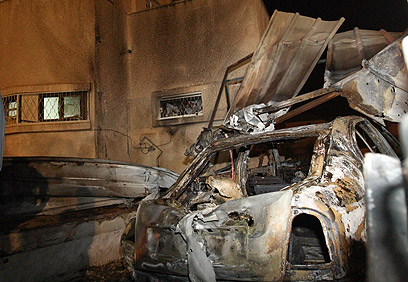 "The minute Hamas took responsibility, it invited an escalation from our side as well," a government source said ahead of the meeting.

The rocket fire towards the south reached its current peak Saturday night with several salvos aimed at Beersheba. One of the Grad rockets hit a home, leaving one man dead and one woman mortally wounded.

Earlier in Ofakim, a rocket hit an empty house; a baby and young boy who were nearby were mildly wounded by shrapnel.

For the first time in this cycle of rocket barrages, Hamas' Izz al-Din al-Qassam Brigades took responsibility for the rocket fire. Friday night the group announced that the "calm with Israel was over."