Driving to Eilat was impossible; road blocks, erected by the police and the army, were scattered all along the way. Eilat looked empty at first, but people were seen camping and tanning on the beach.

Only 2 families were crossing the border into Sinai on their way to the casino. The Bedouin taxi drivers looked out for the tourists that were too afraid to come. Israelis have lost faith in Sinai.

Crossing into to Egypt was easy; the officials were friendly. At the border we were met by Hassan, an old friend, and an honest and loyal one at that. 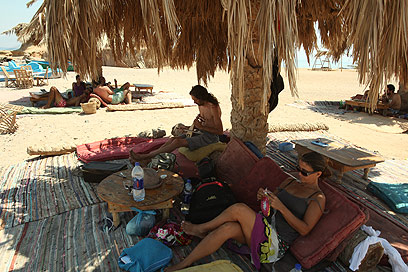 Sinai has changed quite a bit over the past 30 years, ever since it was turned over to Egyptian rule. The coast became a paradise for tourists, and the mountains turned into opium and cannabis fields.

Over the past decade, the north of the peninsula has turned into a smuggling region. Drugs, women, refugees, and weapons make their way into Israel, while cars and stolen goods are sneaked into Sinai.

The tribes of northern Sinai - the Tarabin and Ahiwat – have become the primary players in the smuggling business. The Egyptian security forces were too corrupt and too weak to control them. The result was a no man's land. Then came the revolution. The tribes realized that the time has come to pressure the Egyptians to pay them for protection. The Tarabin - the biggest tribe, whose territory stretches from El Arish to Nuweiba and all the way to the Israeli border – launched an attempt to redefine the law in Sinai. 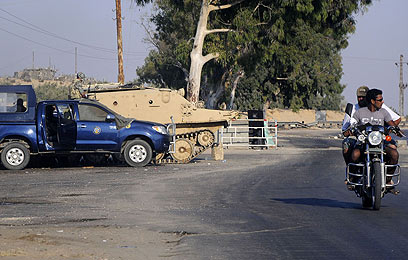 The Egyptians are aware of the development, and are fighting against it. It is now the army that's in charge there, not the corrupt police.

Hassan says that it is unfair to blame the Egyptians for the recent terror attacks. There are dozens of kilometers of border preceded by 60,000 square kilometers of mountainous terrain. This is not Gaza; people can sneak through the wadis, he claims. He is right. Within the Tarabin tribe, it is the youth that's in charge of the smuggling.

"You should believe me that among the Tarabin there are many who are against it, but the culture has changed," he says. "Now there are many young people who make a lot of money by smuggling, trafficking and growing opium. But we are talking among the tribes to stop it."

'We will protect any Israeli'

Sinai is a poor region, and money can buy anything. Big money comes in from Lebanon, the Gaza Strip and Iran.

I ask Hassan if he knows that there are people in Israel who want the Israeli army to come in and take care of the networks that are flowing the money in.

"No way," he says. "The Egyptian army won't let you. It's a bad idea. You should block the border on your side and let the Egyptians bring order to Sinai." Can they? I ask. "I can't be sure about it, but there is a new Sinai governor, who is an army man." At that moment, the new leader's convoy passes us by on its way from Taba to Nuweiba. "This is the army, not the police," Hassan continues. "They don't play games. They shoot to kill and they are honest. And they want to show that Sinai is part of Egypt." 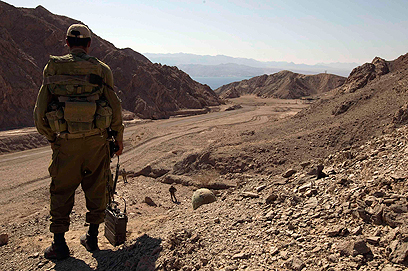 And what about the Bedouins?

"We shall protect any Israeli that comes on our territory," he says. "We have guards in the wadis. It is the main road that I'm afraid of. Too many people that we don't know can come from the north. But the army controls the roads now. "Listen," Hassan says. "There are bad people, and their families are bad. But on the day they die, their children will die with them. This is the Bedouin law." Sinai is quiet. There are still Israelis camping along the beach, enjoying the water and the calm. Everything looks quite safe.

It seems that if the Israeli government avoids invading Egyptian territory, and investigates the killing of the Egyptian soldiers hastily, cooperation will be restored and the fight for Sinai's control will still have a chance.

If Israel shall think that there is a vacuum in Sinai, the threat of clash shall become a real one.

In the meantime, the sea is as beautiful as ever.