Barak warns enemies to be 'decapitated'

Defense Minister Ehud Barak visited an Iron Dome battery in the south on Sunday, and said the IDF would continue to go after those who are attacking Israel.

"The IDF is hitting the terrorists hard, and will continue to operate as needed," he told the troops in the area. "The heads of the Popular Resistance Committees who sent the attackers were killed with swift and powerful action. Since then, we have launched dozens of attacks against members of the Islamic Jihad and Hamas.

"Those who operate against us will be decapitated," he added.

Since Thursday's terror attacks the IDF says it has killed 12 terrorists residing in the Gaza Strip – seven belonging to the PRC, five of whom are said to have been involved in planning the attacks, three Islamic Jihad gunmen, and two Hamas members. 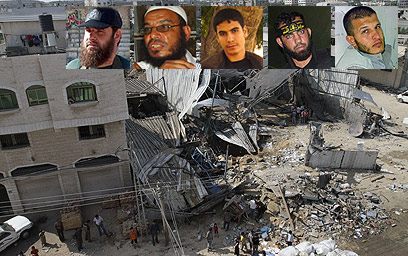 Barak also commended the Iron Dome system, noting that the percentage of missiles intercepted by the batteries in recent days is "relatively high."

"Of course there are things that need fixing," he noted. 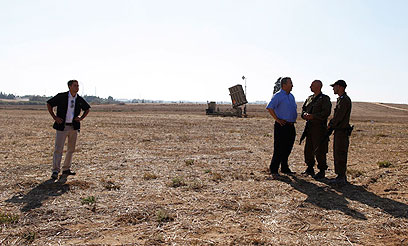 According to Barak, two Iron Dome missile defense batteries are currently operational, and another one is expected to be set up within weeks. Within two years, nine such systems are to be available for IDF use.

The defense minister said the attacks on the south might last a few more days.

'Hamas is setting the pace'

Meanwhile, a senior defense establishment official told Ynet that the conclusion of the attacks on the south is not yet in sight.

"We cannot know where the (escalation in the south) is going," he said. "The Palestinians have been hit hard since Thursday. (Hezbollah chief) Nasrallah said that he wouldn't kidnap soldiers if he would know the outcome - that's how it is today." Other senior defense establishment officials rejected claims that Israel is holding back in responding to the rocket fire. "We activated our systems to hit those who are firing the rockets," one official said. "Those who were firing have been hit. It's not a small matter, it was highly successful." 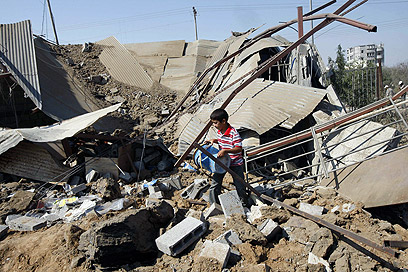 Gaza after attack (Photo: AFP)
According to the officials, the conclusion of the fire exchanges depends on Hamas. "Now we must decide what is to be done next," one official said. "Hamas says one thing, and then says something else. They don’t want to get hit by another Operation Cast Lead. They understand. The eight-minister forum decided yesterday to wait and see what Hamas does… Hamas will set the pace, and Israel will act accordingly." Earlier, political sources addressed the relative calm that followed the barrage of rockets fired on Beersheba on Sunday morning, and said a restrained response was meant to prevent further escalation. But if the attacks don't stop, "all of the options are on the table", one source said.  A senior political official denied reports that a ceasefire is being negotiated. "There are sources that transfer all kinds of messages, but we decided that we will not negotiate a ceasefire," he said. "The policy so far has been one of deterrence. If Hamas is quiet, Israel will remain quiet as well. "It is currently unclear whether the situation is about to calm down," he added.

Palestinian sources reported earlier that a ceasefire deal is being discussed in Cairo. A senior Islamic Jihad official said that Palestinian factions gathered to negotiate a ceasefire, and the Maan News Agency reported that the Gaza authorities plan to announce that the rocket fire is to stop at 9pm. Jerusalem officials said they are not familiar with such plans.